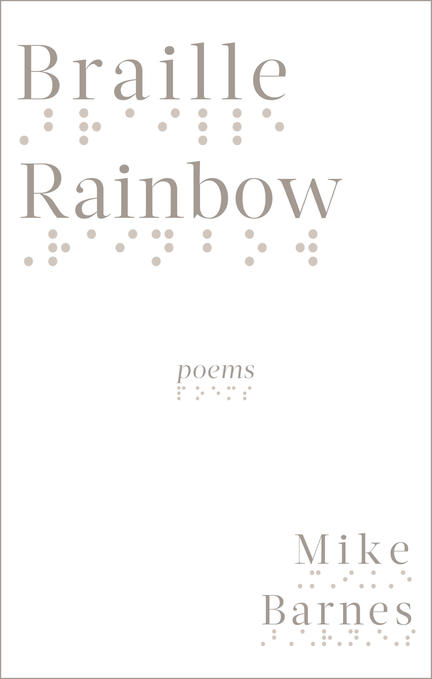 FINALIST FOR THE 2020 NELSON BALL PRIZE

"In a dark time," wrote Theodore Roethke, "the eye begins to see"—and with Braille Rainbow, Mike Barnes reveals both darkness and the light that shines beyond it. Beginning with a suite of poems completed before and immediately following his admission to a psychiatric unit as a young man, Barnes's quiet lyricism and formal sensitivity capture those moments of perception that remind us how to see.

Please note that the text of this book is not produced in braille.

He died in his mid-twenties
(typically, nobody seemed to know what of).
Got himself safely underground
before the rest of us had had our first cancer scare.
But he was always slipping past the lens,
way over at the cropped edge of the class picture
or dead in the centre in an egg of glare.
He might be at the vortex of a scrum or rumble
or flopped down in the field beyond the goal posts,
oblivious to calls to return, watching
(perhaps) an ant traverse a blade of grass.
In those days no work meant you failed.
“Have you finished, Earl?” the teacher
asked when his head sank onto his arms.
“No.” “Have you started?” “No.”
Everyone, even she, laughed. Everyone
except Earl. He rode out humour
the way a pine tree rides out rain.
A cipher makes a tricky victim:
he may become a black hole or a mirror.
Our bully picked him out only when
he’d run through everyone else repeatedly.
Earl didn’t confront, didn’t retreat.
He stood there and one punch knocked him flat.
He lay for a while with his face to the sky
(so long that some of us
looked up too—just blue and fluffy clouds)
and then he got up and walked away
toward wherever he lived, getting
small slowly, with every few steps
bringing a hand to his face and
flinging a ribbon of blood down at the dust.

Two deaf parents who taught him sign language
which he forgot after they died.
Next to mine, the best beat-up old denim jacket
in the crew.
Small hands for such a big man.
Thick dark hair, greenish-brown eyes, and one of the handsomest
faces I’ve seen outside of movies.
A talent for mimicry.
An irritating habit of taking things too far.
An endearing one of apologizing when he did.
Small learning and large curiosity.
A pretty short attention span.
An unshakeable belief that women ejaculated
when they came.
Many girlfriends.
Dozens of friends, including ex-girlfriends.
A part-time DJing job where he met many of his friends
and girlfriends and scored high-quality drugs.
Inoperable colon cancer at age 28.
A cop costume so good it almost got him beaten up
by Halloween partyers who had flushed their dope
until he shared out his own which was better.
A filthy apartment piled with pizza boxes.
A grin no one could resist.
Nimble feet, with which he performed amusing untrained
tap, soft shoe, and jig.
Zero ambition.
Occasional mean moods but no cruel bone in his body.
A Jimmy Cagney routine in which while singing “Yankee
Doodle Dandy” he ran at a wall and up it and back-
flipped off of it, landing on his feet,
which never should have worked because Cagney
was a shrimp and Bill was linebacker-sized
but I saw it, many times, from 1981 to 1985,
during the long afternoons when the galleries
were empty.

"Remarkable... haunting... striking... [Barnes] writes affectingly of his struggles with mental illness (“a picking up and dropping again/of the pieces I could salvage/ in a swamp between dread waters and dry land”) but also of finding joy in small things." —Toronto Star

“While the 13 poems demonstrate [hebephrenia], they do much more. One poem (in its entirety) reads as utterly lucid: ‘cast your prejudicial eye / into the sea. as it falls / mumble something bitterly / about an eyepiece that floats.’ Another, ‘failed inventory,’ is as tightly structured as they come, each line building on the previous one — ‘the chair chaired the meeting / the pen penned the minutes’ and so on until the ‘I’ of the poem comes undone in an anguish of confusion and observation, finally tying together ‘I’ and ‘eye.’. . . But in case anyone thinks Barnes’s work is all dark (it mostly is), he does also flirt with joy.” —Quill & Quire

“Recounted in fragmented, almost impressionistic prose that is sharp as glass shards, The Adjustment League... is an intense journey into the underbelly of contemporary society, and a visceral descent into darkness. It is a powerful and original work, which succeeds as a mystery and something altogether deeper.”—Quill and Quire

“The Adjustment League’s superpower is in its crackling portraits. The Super takes his place in the queue of great damaged detectives (see Sherlock Holmes). ... It’s this Superman’s mind that’s stronger than steel.”—The Globe and Mail

“… fiercely alive, marked by a sharp, unerring eye for detail and a wonderful way with metaphors.”—Toronto Star