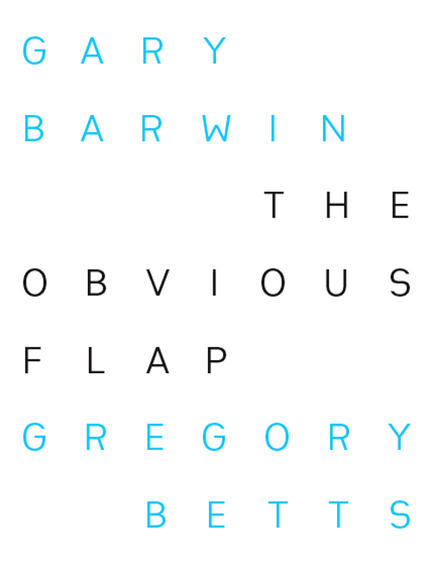 what if the rain
referred to something else?
and bowling
and shoes
were done with the mouth?

Sometimes language, thoughts, and emotions are a fixed structure like a warehouse. Sometimes they are fog, waves, light, or music. This is LSE: Language as a second English. English as a grammar of ghosts. Words as the snowfall of ideas.

The Obvious Flap is a musical, poetic flux of recurring and recursive images exploring language's luminous fringes of language. The text weaves a variety of thematic threads of humour, literary allusions, and narrative into a fabric that spreads into an open, proprioceptive linguistic environment. Gary Barwin and Gregory Betts have concocted a collaborative jam session for multiple larynxes and have made an obvious flap as they have fallen through the mirror into Plunderland.

not everyone is a poet
my dog for instance.