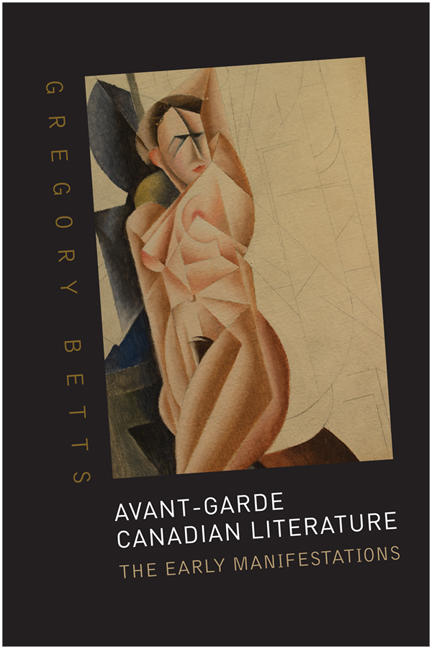 In Avant-Garde Canadian Literature, Gregory Betts draws attention to the fact that the avant-garde has had a presence in Canada long before the country's literary histories have recognized, and that the radicalism of avant-garde art has been sabotaged by pedestrian terms of engagement by the Canadian media, the public, and the literary critics. This book presents a rich body of evidence to illustrate the extent to which Canadians have been producing avant-garde art since the start of the twentieth century.

Betts explores the radical literary ambitions and achievements of three different nodes of avant-garde literary activity: mystical revolutionaries from the 1910s to the 1930s; Surrealists/Automatists from the 1920s to the 1960s; and Canadian Vorticists from the 1920s to the 1970s. Avant-Garde Canadian Literature offers an entrance into the vocabulary of the ongoing and primarily international debate surrounding the idea of avant-gardism, providing readers with a functional vocabulary for discussing some of the most hermetic and yet energetic literature ever produced in this country.

‘This book greatly advances our understanding of the experimental élan of Canada’s avant-garde throughout the century, and provides insight into collaborative authorship, radical networks, and surrealist and automatist writing and painting.’

‘A fascinating work of scholarship, the book is an affront to the persistent belief that Canadian literature of the early twentieth century is a dreary subject. Betts has shown that in fact it is hardly comprehended….Avant-Garde Canadian Literature is an admirable and welcome contribution to the history and interpretation of literature in this country.’

‘Betts’ weaving of past and present, theory and literary practice, aesthetics and politics is carried out in a brilliant way.’