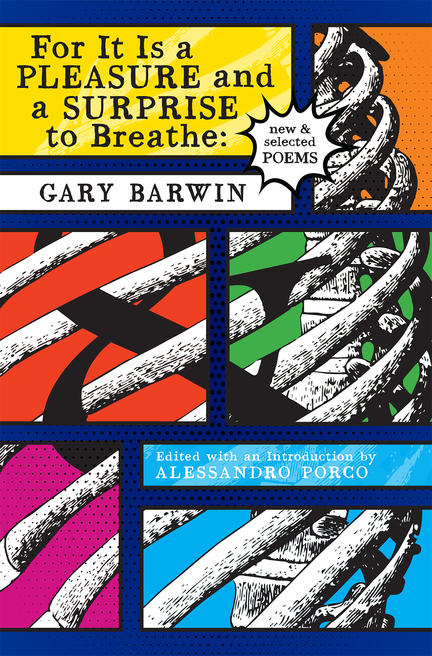 For thirty-five years, award-winning poet Gary Barwin has been opening up new ways of being in poetry. In this long-awaited new and selected volume, For It Is a Pleasure and a Surprise to Breathe, Barwin and his editor, Alessandro Porco, have drawn from his extensive writings in previously published books, chapbooks, small press works, magazine and journal publications, as well from unpublished and uncollected works, to create a category-defying collection. With audacity and the occasional wisecrack and pun, too, his work uses a variety of forms and styles to investigate aesthetics, identity, culture, ecopoetics and questions of language. Throughout, Barwin stretches language to its fullest extent, whether he's exploring alternative translations or working with visual poems that explore and exploit the borderblur between poetry and art. This collection will surprise, delight and move readers, and it establishes Barwin as one of Canada's most accomplished and important poets.

"Author Gary Barwin . . . is producing some of the most innovative creative works of our time." - Utne Reader

"Among contemporary poets, Barwin stands out as exceptional for his ability to plunder the synesthetic splendor of words. His poems seem to lift from the printed page and nosedive into other sensory dimensions . . . Under Barwin's gaze, the world as we know it is continually stretched, jolted, and tweaked." - Foreword Reviews

"Barwin's poems are struck through with a wide-eyed wonder, and when they aren't revelling in the sound of language or crafting crazed imaginings, they work to dig out the strangeness of the everyday." - Winnipeg Free Press

"As adept at lyricism as he is at the more conceptual poetries he tends to favour. It's not every poet who can display a decided mastery of the Oulipian N+7 noun substitution method in one poem, and break your heart in the next, but Barwin has the skill and versatility to do just that." - Fiddlehead

The Most Charming Creatures