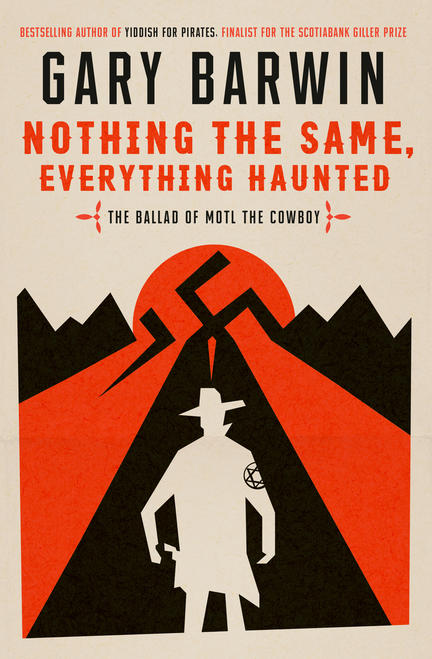 A middle-aged Jewish man who fantasizes about being a cowboy goes on an eccentric quest across Europe after the 1941 Nazi invasion of Lithuania in this wild and witty yet heartrending novel from the bestselling author of Yiddish for Pirates, shortlisted for the Scotiabank Giller Prize.

Motl is middle-aged, poor, nerdy, Jewish and in desperate need of a shave. Since having his balls shot cleanly off as a youth in WWI, he's lived a quiet life at home in Vilnius with his shrewd and shrewish mom, Gitl, losing himself in the masculine fantasy world of cowboy novels by writers like Karl May--novels equally loved by Hitler, whose troops have just invaded Lithuania and are out to exterminate people like Motl. In his dreams, Motl is a fast-talking, rugged, expert gunslinger capable of dealing with the Nazi threat. But only in his dreams.

As friends and neighbours are killed around them, Motl and Gitl escape from Vilnius, saving their own skins. But they immediately risk everything to try rescue relatives they hope are still alive. With death all around him, Motl decides that a Jew's best revenge is not only to live, but to procreate. In order to achieve this, though, he must relocate those most crucial pieces of his anatomy lost to him in a glacier in the Swiss Alps in the previous war. It's an absurd yet life-affirming mission, made even more urgent when he's separated from his mother, and isn't sure whether she's alive or dead. Joining forces, and eventually hearts, with Esther, a Jewish woman whose family has been killed, Motl ventures across Europe, a kaleidoscope of narrow escapes and close encounters with everyone from Himmler, to circus performers, double agents, quislings, fake "Indians" and real ones. Motl at last figures out that he has more connection to the Indigenous characters in western novels than the cowboys.

An imaginative and deeply felt exploration of genocide, persecution, colonialism and masculinity--saturated in Gary Barwin's sharp wit and perfect pun-play--Nothing the Same, Everything Haunted: The Ballad of Motl the Cowboy is a one-of-a-kind novel of sheer genius.

Excerpt: Nothing the Same, Everything Haunted: The Ballad of Motl the Cowboy (by (author) Gary Barwin)

As usual, he was bent over the kitchen table, his mottled and hairy nose deep in the pale valley of a book, half-finished plate of herring beside his elbow, half-eaten egg bread slumped beside a Shabbos candlestick. His old mother was out shopping for food while she still could.

So, this Motl, was he a reader?

If the world was ending, he would keep reading.

The world was ending. He was still reading.

So, what was this book he had to read despite everything?

One of the great westerns of the American frontier, of course. Even though he knew that Hitler adored them.

“The master race should be brave as Indianers,” Der Führer had said, and sent boxes of Karl May’s Winnetou noble savage novels to the eastern front to inspire his troops—those same manifest destiny soldiers crossing the country with orders to kill Motl, his mother and all the other Jews.

Did Motl intend to do something about this?

Yes. He would sit at the table, his shlumpy jacket turned up at the collar, his hat like a shroud of mice askew on his sallow head, and read.

Was Motl a man of action?

“If parking his tuches all day and all night on a chair doing nothing but reading is action,” his mother would say, “he’s a man of action. Action, sure. Every day he gets older and more in my way.”

Why was he still reading this western?

Because Motl, this Litvak, this Lithuanian Jew, this inconceivable zaidy, my grandfather, this citizen of the Wild East—that brave old world of ever-present sorrow, a sorrow that had just gotten worse—had chosen the life of the cowboy.

He would be that hombre who sits on his chair and imagines being calm and steady and manly, speaking only the fewest of well-chosen words, doing only what he wanted and what he must under that vast, unpatented western sky.

“And why not?” he would say. “Should my life be nothing but the minced despair and boiled hope of an aging Jew, too thin to be anything but borscht made by Nazis? I choose to think myself a Paleface chuck line rider of the doleful countenance, a Quixotic Ashkenazi of the bronco, riding the Ostland trail. Like my mother said when I told her I wanted to be a doctor, ‘Mazel tov, Motl. Nothing is impossible when it’s an illusion.’”

He would say, “What’s the difference between a Jewish cowpoke and beef jerky? It’s the hat. And feeling empty as a broken barrel. Jerky don’t never feel such hollowness, least not by the time it’s jerky. But the cowboy, the cowboy keeps riding. He don’t look back. Eventually, if he’s lucky, he too becomes leathern and feels only what jerky feels.”

Motl. Citizen of Vilna. Saddlebag of pain. Feedbag of regret.

At forty-five, he had a history. As a Lithuanian Jew, he was pickled in it.

But though neither he nor his mother knew it at the time, something had changed. Somewhere, deep down in the overworked mine shaft of his imagination, it had been determined that he would set out on a perilous adventure, this time of his own choosing. He would get up on his horse and ride.

And he would have a child.

And avoid being killed. Sometimes you have to save your own bacon, when you’re a Jew.

The next day, he went to the barber’s. Even a grown man will cave in to his mother’s demands that he groom if she won’t make food for him. Eyes closed, a Texas reverie floating through his mind like the scent of campfire, Motl lay back in the red chair and awaited his shave.

“Under a hot towel, a cowpoke can think big thoughts, but to act he must stand up,” he said.

For a moment, the towel hung from his jowls, the Santabeard of a Hebrew god. Then it fell away.

“Barber,” Motl said. “I must seize these last days while the possibility of life remains.”

The barber said nothing, wet blade held between trembling fingers.

“The kabbalists speak of repairing the world, healing what is broken. It’s my time,” Motl said, looking round that hair-strewn palace of strop and whisker, that little shop of Hebrews. “Barber, I thank you, for I have learned much under your towel.”

Shave and a haircut.

—Did the barber, Shmuel, expect payment?—

Did Motl toss him these two coins before his impromptu departure?

Having had neither shave nor haircut, he only waved, then hightailed it into the bright sun of Shnipishok, that region of Vilna whose name sounds like scissor blades. He ran through its streets, feeling open to possibility and getaway.

Did Shmuel chase him with his blade?

Let’s say it was a close shave.

This day, as the towel fell from his bristly chins, Motl saw beyond his scraggy self and straight into his crimpled yet resilient heart. He understood that it could become pink and new as the callow fundament of a child. How? He recalled that there remained a means by which he could become procreator and thus begetter. In this time of murder and loss, to make new life would be to make life new. It would be a salve for the broken world. He could say, both to his child and to himself, “It is worth being born into this world. It is worth being born.”

And this fathering, would it involve the usual squirming ministrations known since our ancestors first began to beget?

But first, he had to retrieve his old saddle of a kvetching mother and get them both the galloping Gehenna out of the Einsatzgruppening hell that Vilna would soon be.

The cavalry were coming, or—raised as they were on Karl May—they’d more likely imagine themselves Aryan elves of the plains, Rhineland braves with bellies like six-packs of strudel.

Coming to lead their band of Lithuanian Lakota against the godless yellowstars, locals happy to have the excuse for an anti-Semitic whoop-up.

Besides, if a boychik cowpoke was going to ride off in quest of new life, who else to bring but his mama?

But first, before he even retrieved this mama, we must go back nearly twenty years and speak of the family jewels because, in the end, that’s where all roads begin.

WINNER OF THE 2021 CANADIAN JEWISH LITERARY AWARD FOR FICTION

“[A] boundary-pushing [and] . . . very funny book. . . . There are few voices in Canadian writing as original as Barwin’s.” —Toronto Star
“[Gary Barwin] proves again why he’s one of the most distinct voices in Canadian lit.” —The Globe and Mail

“[D]arkly humorous and affecting . . . the fantastic one-liners deepen the poignancy of the horrors. This inventive, madcap novel is a stunning testament to Jewish humor and survival.” —Publishers Weekly
“Barwin is a talented and prolific artist . . . and this novel showcases his signature style and strengths: acrobatic language bursting with puns, rhyme, alliteration and all manner of wordplay, madcap escapades, and a sprinkle of slapstick. . . . This wildly inventive novel plays by its own rules. In Barwin’s world, imagination is freedom, and comedy, courage.” —Quill & Quire
“This is a novel steeped in history and truths—and ingenuity. . . . An adventure story set in horrific times, this novel manages to be darkly funny and packed with wisdom.” —The Globe and Mail
"Barwin's second novel deserves the same attention as his first; it takes risks with an even more ambitious premise, is filled with delightful wordplay and poetic language and, like Yiddish for Pirates, there is simply not anything else out there quite like it.” —Winnipeg Free Press

“A fierce and funny horse ride through hell, told with brio.” —Yann Martel, author of Life of Pi

“A hilarious and life-affirming adventure, equal parts Sound of Music, Blazing Saddles and matzo ball soup. This is Barwin’s tallest and deepest tale yet, a crackers modern Western that meditates (as it moseys) on compassion, kinship and the absurdity of atrocity.” —Sean Michaels, author of The Wagers

“This is the most wildly inventive novel I have read in decades, and Gary Barwin is the enormously talented wordsmith who has pulled it off! It begins in the nightmare of the Holocaust in Nazi-occupied Lithuania and travels across Europe and North America examining the plight both of Jews and Indigenous peoples. And through it all we find jokes based on cowboy themes. Jokes! What are jokes doing among these calamities? Displacing the horror, easing the way, making the tragedies, if not bearable, at least something one can talk about without incessant weeping in a world haunted by the past.” —Antanas Sileika, author of Provision Yours

The Most Charming Creatures