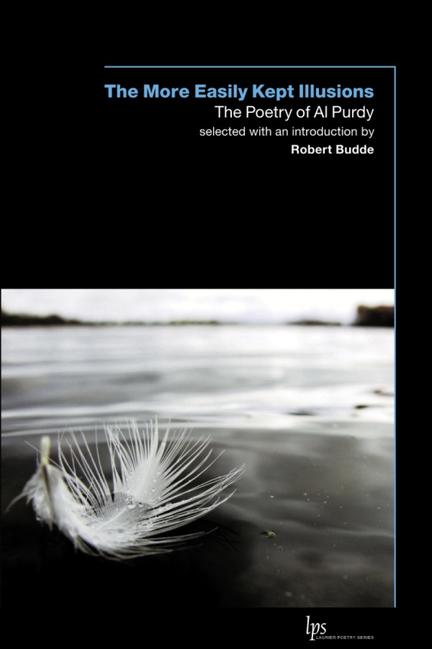 Much-loved, cantankerous, and brilliant, Al Purdy galloped across the Canadian literary landscape for decades, grandly embodying the self-taught and hard-living image of the 1960s and ’70s poet. The More Easily Kept Illusions: The Poetry of Al Purdy is a selection of thirty-five poems that includes some of his best-loved and unearths lost and ignored treasures.

Robert Budde introduces the collection with an overview of Purdy’s tumultuous life of letters, his legendary personality, his outrageous antics, his peers, his influences, and the history of his publishing career. Reorganizing Purdy’s body of work, this collection also re-interprets the chronological and thematic development of his writing. Choosing poems for a book like this is necessarily an act of literary criticism and Budde takes care to balance the various critical attentions that have structured the historical responses to Purdy’s work. The selected poems will mix lesser-known gems with Purdy’s greatest hits. Teachers, poetry-lovers, students, and writers will rediscover Purdy’s unique voice. Those who are new to his work will get a full and rich sense of the man some have called the last Canadian poet.

"The books are fairly slim (ranging from fifty-six to eighty pages), but each provides a decent outline of the respective poet's career, style, and dominant concerns. The introductory essays are straightforward and informative--they provide a useful interpretive framework for anyone coming to this poetry for the first time. These volumes seem designed for students and educators; each offers a more complete picture of the poet than one would get from an anthology."

"The quest for a wider audience for poetry may be quixotic, but this series makes a serious attempt to present attractive, affordable selections that speak to contemporary interests and topics that might engage a younger generation of readers. Yet it does not condescend, preferring to provide substantial and sophisticated poets to these new readers. At the very least, these slim volumes will make very useful introductory teaching texts in post-secondary classrooms because they whet the appetite without overwhelming."

"The poems selected for inclusion...give an honest taste of Purdy, both accessible and convoluted, often at the same time (a rare feat, in my mind)"

"An excellent overview of Purdy's poetry, with an informative introduction to his career and poetics written by Robert Budde and an afterword by Russell Morton Brown, editor of Purdy's first Collected Poems, published in 1985, which provides us with an insight into Purdy the man."

Other titles by Robert Budde

Other titles by Russell Morton Brown