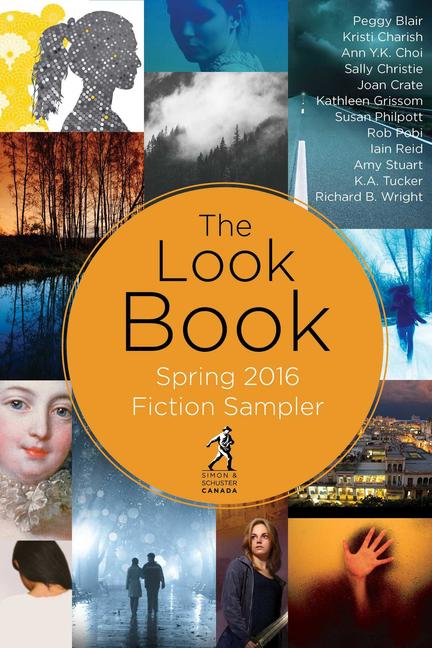 Complete with new beginnings and the promise of satisfying endings, The Look Book sampler offers the best in fiction from across the Simon & Schuster Canada Spring 2016 list. This array of debut authors and perennial favourites will allow you to step back in time with our historical fiction, time travel with our fantasy writers, fall in love with our inspirational romance, marvel at our literary stylists, and be enthralled by our dark thrillers. If you would like to learn more about any of our authors or the titles featured, please visit us at SimonandSchuster.ca, follow us on Twitter at @simonschusterCA, or like us at Facebook.com/SimonandSchusterCanada.

With chapter excerpts from the following Spring 2016 new releases:

Dark Territory, by Susan Philpott
He Will Be My Ruin, by K.A. Tucker
Owl and the City of Angels, by Kristi Charish
Black Apple, by Joan Crate
Still Mine, by Amy Stuart
Glory Over Everything, by Kathleen Grissom
The Rivals of Versailles, by Sally Christie
Kay’s Lucky Coin Variety, by Ann Y.K. Choi
Nightfall, by Richard B. Wright
Mannheim Rex, by Rob Pobi
Umbrella Man, by Peggy Blair
I’m Thinking of Ending Things, by Iain Reid

Susan Philpott holds a master’s degree in both science and social work. She has worked as a university teaching assistant, zookeeper and mental health professional. The mother of three grown children, she lives in the wilds of Ontario with her husband and yellow lab.

K.A. Tucker writes captivating stories with an edge.
She is the USA Today bestselling author of 14 books, including Ten Tiny Breaths and Burying Water, and her latest Adult Suspense novel, He Will Be My Ruin. Her books have been featured in national publications including USA Today, Globe & Mail, Suspense Magazine, and Publisher's Weekly.
K.A. Tucker currently resides in a quaint town outside of Toronto with her husband, two beautiful girls, and a Chug.

Kristi is a scientist and science fiction/urban fantasy author who resides in Vancouver, Canada. Kristi writes what she loves; adventure heavy stories featuring strong, savvy female protagonists with the occasional RPG fantasy game thrown in the mix. She is also a co-host on the popular Adventures in Sci-Fi Publishing Podcast.
The first installment in her debut urban fantasy series, Owl and the Japanese Circus (Simon & Schuster) is out and available in bookstores and through online ebook retailers. The second in series, Owl and the City of Angels, is out Jan 2016. Her second series, KINCAID STRANGE (Random House Canada), about a voodoo practioner living in Seattle, is out May 2016.
She received her BSc and MSc from Simon Fraser University in Molecular Biology and Biochemistry, and her PhD in Zoology from the University of British Columbia. She is represented by Carolyn Forde at Westwood Creative Artists.

Joan Crate was born in Yellowknife, N.W.T., but moved to Vancouver after her miner father decided to become a teacher. Because her father taught on various Reserves in British Columbia, Alberta and Saskatchewan, Joan grew up in a variety of Metis and Native cultures. She graduated from the University of Calgary with an Honours BA in English and a Masters in English (with Distinction). Her Honours Project, a poetry collection entitled Pale as Real Ladies, was published by Brick Books. She has also published a first novel, Breathing Water, with NeWest Press. She taught literature, including Native writers, for over twenty years at Red Deer College. Crate drew on her first-hand knowledge of and sympathy for Native cultures to write Black Apple, in addition to researching the history of residential schools and interviewing survivors. She lives with her husband and children in Calgary.

Joan Crate says that while her family history is not entirely clear, she believes her ancestors may have been Metis from Manitoba who dispersed east and west after the Riel Rebellion. In her own words: “My dad brought us up with exposure to First Nations and Metis cultures, no matter where we were living, so my sister and I were taken to potlatches, pow-wows, art exhibitions and political rallies from an early age. I would have to say that it’s the cultural exposure rather than the racial and, to a lesser extent, the political that makes me identify with First Nations/Metis cultures.”

Amy Stuart is the #1 bestselling author of two novels, Still Mine and Still Water. Shortlisted for the Arthur Ellis Best First Novel Award and winner of the 2011 Writers’ Union of Canada Short Fiction Competition, Amy’s writing has previously appeared in newspapers and magazines across Canada. In 2012, Amy completed her MFA in Creative Writing through the University of British Columbia. She lives in Toronto with her husband and their three sons. Connect with her on her website AmyStuart.ca and on twitter @AmyFStuart.

Born and raised in Saskatchewan, Kathleen Grissom is now happily rooted in south-side Virginia. She is the author of The Kitchen House and Glory over Everything. You can visit her website at KathleenGrissom.com.

Sally Christie is the author of The Sisters of Versailles and The Rivals of Versailles. She was born in England and grew up around the world, attending eight schools in three different languages. She spent most of her career working in international development and currently lives in Toronto. Visit SallyChristieAuthor.com to find out more about Sally and the Mistresses of Versailles trilogy.

Originally from South Korea, Ann Y.K. Choi immigrated to Canada in 1975. She is a graduate of the Humber School for Writers and the Creative Writing Certificate Program at the University of Toronto. Most recently, she completed an MFA in Creative Writing at National University in San Diego, California. Her debut novel, Kay’s Lucky Coin Variety, was a finalist for the Toronto Book Award. The story, set in the 1980s, was inspired by her experiences working in her family-run variety store. A teacher with the York Region District School Board, Ann lives in Toronto with her husband and daughter.

The author of nine novels, Richard Wright has been published in Canada, the United States, and the U.K. His novel, The Middle of Life, won the city of Toronto Book Award and the Faber Award, and his novel, The Age Of Longing was nominated for the Governor General's Award and the Giller Prize. He lives, writes, and teaches in St. Catherines, Ontario.

Iain Reid is the author of two critically acclaimed, award-winning books of nonfiction; One Bird's Choice and The Truth About Luck, which was selected by The Globe and Mail as one of the best books of 2013. Reid’s essays, articles, and reviews have appeared in a variety of publications throughout North America. In 2015, he was the recipient of the prestigious RBC Taylor Emerging Writer award. Reid is a graduate of Queen's University, where he studied history, English literature, and philosophy. I’m Thinking of Ending Things is his first novel.

Other titles by Susan Philpott

Other titles by K.A. Tucker

The Player Next Door

Say You Still Love Me

He Will Be My Ruin

Other titles by Kristi Charish

Owl and the Tiger Thieves

Owl and the Electric Samurai

Owl and the City of Angels

Owl and the Japanese Circus

Other titles by Joan Crate

Other titles by Amy Stuart

A Death at the Party

Other titles by Kathleen Grissom

Beyond The Kitchen House

Other titles by Sally Christie

The Enemies of Versailles

The Rivals of Versailles

The Sisters of Versailles

Other titles by Ann Y.K. Choi

Other titles by Richard B. Wright

A Life with Words

Other titles by Iain Reid

The Truth About Luck

What I Learned on My Road Trip with Grandma

A Year in the Life of an Overeducated, Underemployed Twenty-Something Who Moves Back Home