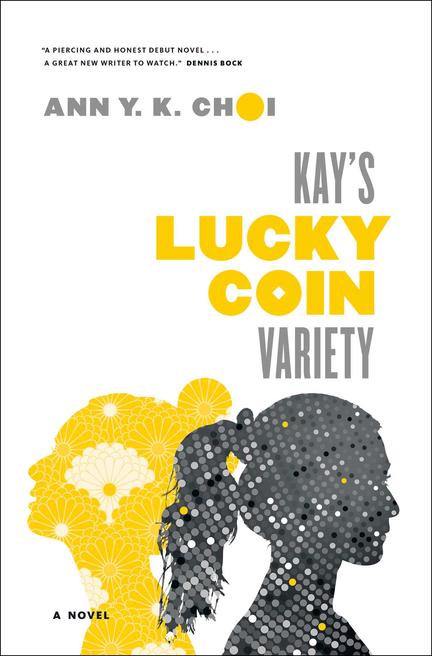 A bittersweet coming-of-age debut novel set in the Korean community in Toronto in the 1980s.

This haunting coming-of-age story, told through the eyes of a rebellious young girl, vividly captures the struggles of families caught between two cultures in the 1980s. Family secrets, a lost sister, forbidden loves, domestic assaults—Mary discovers as she grows up that life is much more complicated than she had ever imagined. Her secret passion for her English teacher is filled with problems and with the arrival of a promising Korean suitor, Joon-Ho, events escalate in ways that she could never have imagined, catching the entire family in a web of deceit and violence.
A unique and imaginative debut novel, Kay’s Lucky Coin Variety evocatively portrays the life of a young Korean Canadian girl who will not give up on her dreams or her family.

Originally from South Korea, Ann Y.K. Choi immigrated to Canada in 1975. She is a graduate of the Humber School for Writers and the Creative Writing Certificate Program at the University of Toronto. Most recently, she completed an MFA in Creative Writing at National University in San Diego, California. Her debut novel, Kay’s Lucky Coin Variety, was a finalist for the Toronto Book Award. The story, set in the 1980s, was inspired by her experiences working in her family-run variety store. A teacher with the York Region District School Board, Ann lives in Toronto with her husband and daughter.

“A story of Korea and Canada, of parental sacrifice and filial duty, of inconceivable loss, and budding literary desire, all set in a decade of Tiger Beat, Star Wars and Cyndi Lauper. Choi’s first novel is both sad and exhilarating. For me, the real beauty of this book is to show that, for many of us, writing may be our most embracing and true home.”
—Kyo Maclear, author of Stray Love
“Ann Y.K. Choi’s exploration of the traditions and secrets of the old world as they collide with the promise and demands of the new world make this piercing and honest debut novel a must read. A deceptively clear and compelling voice signals Choi as a great new writer to watch.”
—Dennis Bock, author of The Ash Garden
“Ann Y.K. Choi deftly negotiates the tightrope between a teenager’s dreams in the new world and the expectations of her immigrant parents who, in honouring tradition, also know too well that the family’s future teeters on the precarious, possibly deadly livelihood of their variety store. Told in taut but measured prose, Kay’s Lucky Coin Variety invites the reader into the intimate life of Mary—or Yu-Rhee, her given Korean name—and explores perennial questions of the meaning of identity and home.”
—Denise Chong, author of The Concubine’s Children

Other titles by Ann Y.K. Choi