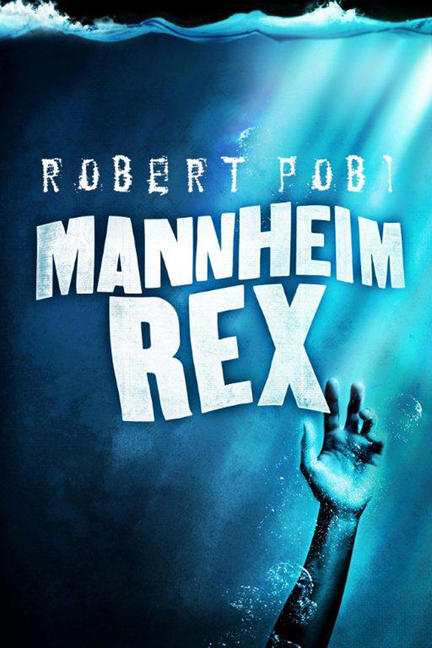 After the sudden death of his wife, famous horror writer Gavin Corlie retreats from New York City to a secluded house on Lake Caldasac. But his new life in the country is far from idyllic; when a thirteen-year-old wheelchair-bound boy named Finn Horn nearly drowns in the lake, Gavin discovers a startling secret: people in this peaceful lakeside community keep vanishing. Is the corrupt, Benzedrine-fueled town sheriff to blame? Or is Finn’s account of a lake-dwelling monster more than a near-death hallucination? Racing against time and Mother Nature, Gavin and Finn embark on a quest to catch a nightmare that seems to have evolved with a single frightful purpose: to feed on human prey.

An homage to the blockbuster Jaws and the classic American novel Moby-Dick, Mannheim Rex is a deep dark thriller that switches seamlessly between heart-warming friendship and heart-stopping action.

“Robert Pobi gives Stephen King a run for his money in Mannheim Rex…This is a wicked page turner that veers between human drama and emotion, to bloody horror, to heartwarming story about friendship and back to terror. It is full of deeply rich characters that readers will enjoy cheering for and both “monsters” are terrifying.” —Amy Phelps for Graffiti Magazine

“Readers who are fans of Stephen King (especially his early-mid career work) will find Pobi’s work to be very readable.” —Novelnaut

“There’s a new gun in town; A deft combination of edge-of-your-seat terror and heartbreaking pathos, Bloodman is one of the strongest debuts I’ve seen in a very long time.” —Spinetingler Magazine