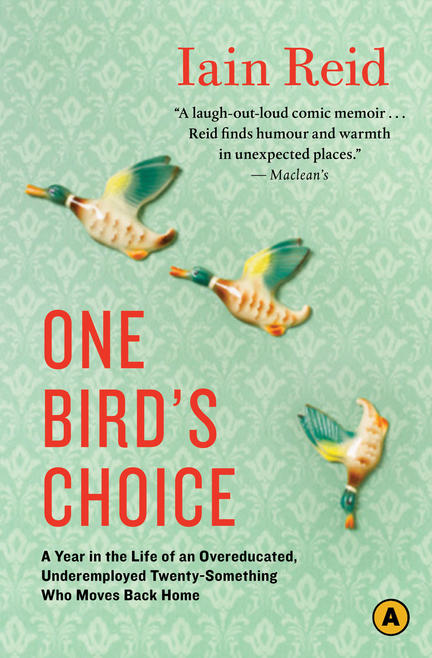 Meet Iain Reid: an overeducated, underemployed twenty-something, living in the big city in a bug-filled basement apartment and struggling to make ends meet. When Iain lands a job at a radio station near his childhood home, he decides to take it. But the work is only part time, so he is forced to move back in with his lovable but eccentric parents on their hobby farm. What starts out as a temporary arrangement turns into a year-long extended stay, in which Iain finds himself fighting with the farm fowl, taking fashion advice from the elderly, fattening up on a gluttonous fare of home-cooked food, and ultimately easing (perhaps a little too comfortably) into the semi-retired, rural lifestyle.

Capturing the angst and humour of his quasi adulthood, One Bird's Choice announces the funny, original, and fresh new voice of Iain Reid.

Iain Reid is the author of two critically acclaimed, award-winning books of nonfiction; One Bird's Choice and The Truth About Luck, which was selected by The Globe and Mail as one of the best books of 2013. Reid’s essays, articles, and reviews have appeared in a variety of publications throughout North America. In 2015, he was the recipient of the prestigious RBC Taylor Emerging Writer award. Reid is a graduate of Queen's University, where he studied history, English literature, and philosophy. I’m Thinking of Ending Things is his first novel.

...gentle but hilarious humour that had me chortling without a break.

The real heroes of the book are Iain Reid's parents, delightfully quirky and ever loving...

A true sense of place is the greatest gift an author can give us as travellers. We talk of Hemingway's Spain or Austen's England . . . I'm not sure the narrator realizes all that he has captured in his pages . . . He's captured a time and place that defines a giant piece of this province, its traditions, and its history.

Reid isn't trying to teach anybody how to eat, pray or love: he simply observes himself, his family and all their laughable idiosyncrasies. . .

Reid is a genial narrator, and you don't tire of his voice.

Cross James Herriot's tales of bucolic British life with Mike Myers' comedic portrayal of his Scottish Canadian family in the film So I Married an Axe Murderer and you end up with Iain Reid's hilarious memoir One Bird's Choice.

...kids and parents will find it particularly enjoyable.

One Bird's Choice...is both about the Boomerang Generation and an example of how that generation got its name.

Reid has aptly captured the angst, humour and quirkiness of his year at home...

Other titles by Iain Reid

The Truth About Luck

What I Learned on My Road Trip with Grandma

Put a Bird on It