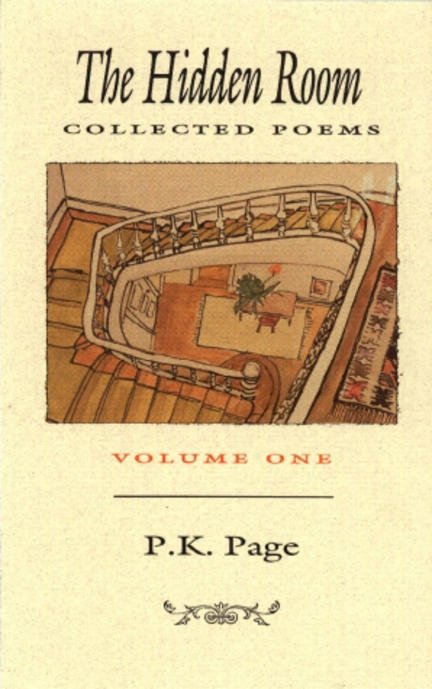 The Hidden Room is filled with treasure gathered from over five decades of some of the best poetry ever written in Canada. Almost all of the poetry P. K. Page has published in volume form is here, all the way from Unit of Five (1944) to Hologram (1994), together with a good many unpublished poems and poems hitherto published only in magazines, from all stages of her career.

A section of luminous new poems completes the volume. Evening Dance of the Grey Flies and Hologram appear substantially as first published, though virtually every other section has undergone thoughtful reassessment by the author with the assistance of editor Stan Dragland. The Hidden Room is something more than simply a mechanical Collected. The inclusion of uncollected and new poems has demanded a re-choreographing, a reassortment of familiar poems into new families.

The Hidden Room is quite possibly the best collection of verse ever published in this country. This is the essential, rather than the entire P. K. Page, a lifetime of work that any poet would be proud to call their own.

It has to be spread out, the skin of this planet,
has to be ironed, the sea in its whiteness;
and the hands keep on moving,smoothing the holy surfaces.
'In Praise of Ironing', Pablo Neruda

The trees must be washed, and the grasses and mosses.
They have to be polished as if made of green brass.
The rivers and little streams with their hidden cresses
and pale-coloured pebbles
and their fool's gold
must be washed and starched or shined into brightness,
the sheets of lake water
smoothed with the hand
and the foam of the oceans pressed into neatness.
It has to be ironed, the sea in its whiteness

and pleated and goffered, the flower-blue sea
the protean, wine-dark, grey, green, sea
with its metres of satin and bolts of brocade.
And sky -- such an O! overhead -- night and day
must be burnished and rubbed
by hands that are loving
so the blue blazons forth
and the stars keep on shining
within and above
and the hands keep on moving.

'If not ''a shilling life'', a glance at Who's Who in Canada will give you all the facts. Which are more than impressive. P K Page, born in 1916 and very much with us is, in brief, a phenomenon; a force majeur in Canadian literary and artistic life; a National Treasure. Her work to date, sprung from the praiseworthy ambition of the lavishly gifted, bestows upon us rich decades of protean accomplishment, of widespread honour and renown. Let us however concern ourselves here with the essential fictions -- with the beginning in delight and ending in wisdom, as Frost has it, of true poems; with this present testament of imaginative, intellectual and spiritual achievement: The Hidden Room: Collected Poems.

'To immerse oneself in these two handsome volumes (elegantly complemented and informed throughout by the drawings and paintings of her ''twin sister, / beautiful as Euclid'', the painter P K Irwin) is to plunge into a deep-freighted, breaking wave of swirled delights and parlous undertows. It is, as with all such translucent ramparts of desire and abandon, best met head-on. This is not to say that one must read consecutively through the some four hundred and fifty pages of poetry and the one dangerous, liminal short story. The ordering of the volumes is credited to Stan Dragland, who ''tackled material spanning sixty years and threaded it together in a manner uniquely his own.'' While the overall drift is chronological, the poems have been so intelligently interwoven that each of the volumes is a realized entity, as each is a reflection of the whole.'

'P.K. Page is a visionary, a descendant of Blake and the alchemist writers. She makes this connection herself in ''Request to the Alchemist'': ''I am a tin whistle/ Blow through me/ Blow through me/ And make my tin/ Gold''. Like Blake, Page is also an accomplished visual artist and would subscribe to his conviction that ''We are led to Believe a Lie/ When we see not Thro' the Eye.'' This is the eye that can see beyond habitual perception, the eye with the power to rend what D. H. Lawrence called the ''great umbrella between mankind and Titans in the wild air.'' That is why Page quotes Theodore Roszak: ''Unless the eye catch fire/ The God will not be seen.''

'Page's poems are spattered with delphinium blue, Van Gogh yellow, and garden green, but I am certain that a word count would confirm the preponderance of gold. There is the poem ''Three Gold Fish'' with its allusion to Blake's ''Tyger'', the ''gold calligraphy'' of grey flies in sunlight, and ''Aurum'', with its artist's ''sparks'' of gold leaf. Gold is the colour of transformation, of turning dross into the extraordinary. In the telling poem ''A Backwards Journey'', Page describes her childhood habit of staring at a can of Dutch Cleanser on whose label ''a smaller Dutch Cleanser woman/ was holding a smaller Dutch Cleanser can.'' And so on, the images repeating themselves in diminishing size until the child believes ''that tiny image/ could smash the atom of space and time.'' The key to this poem is the word ''Cleanser'', which is repeated seven times. Blake wrote, ''If the doors of perception were cleansed everything would appear to man as it is, infinite.''

'The mystical and transcendental are fundamental to Page's sensibility. Yet when she is most obviously a visionary, her poetry is least effective. The ''gold smiles'' of her angels are unconvincing; her golden seraphim are too assured to create the tension on which poetry thrives. She becomes successful when her vision is acted out in natural settings using less ''poetic'' symbolism, and when the visionary world is counterpoised with the humdrum, banal, or violent. In an effective poem like ''The Bands & the Beautiful Children'', music and the imagination are set against the reality of ''straggling grass'' and ''men tired and grumbling''. In her best poems she goes beyond such dualities. ''Stories of Snow'' tells of those living in a world of ''great flowers.with reds and blues'' who dream of a world of whiteness, hunters, and death. What makes this poem remarkable, aside from its dream-inducing cadence and its paradoxical rhymes, is the irony that the white, violent terrain is also gentle, mystical, and as beautiful as the lush, colourful one. This blurring of the typical dichotomies gives the poem a layered depth, a metaphysical aura.'