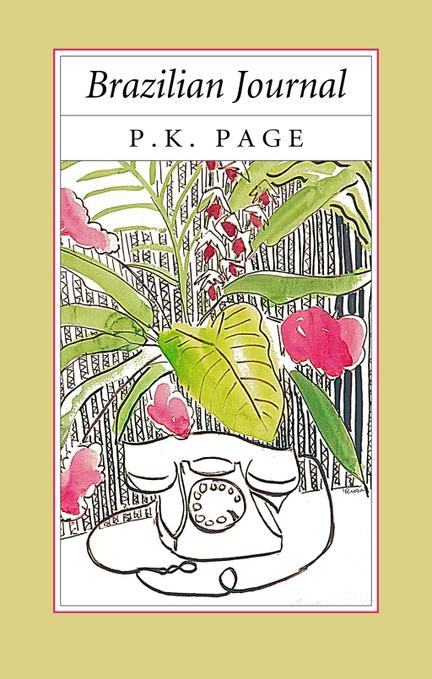 A memory of Brazil and its natural beauty evokes calm, and a strange benediction, as poet P. K. Page recalls (for example) two coloured birds which alight on her husband, Arthur, at dusk, in Rio de Janeiro. Page's three years in Brazil, from 1957 to 1959, retain this luminous, slightly surreal quality in the poet's memory, 'baroque' she once called its landscape and culture.

How could I have imagined so surrealist and seductive a world? One does not like the heat, yet its constancy, its all-surroundingness, is as fascinating as the smell of musk. Every moment is slow, as if under warm greenish water.

The flavour is beyond my ability to catch. The senses are sharpened by that smell -- a vegetable polecat called jack-fruit which when ripe is picked from trees in our jungle; by these sights: Niemeyer's bridges, for instance, built over the canyons of this remarkably mountained city -- long, sinuous, low bridges on pylons, white as platinum against the green of the mato -- with bright glimpses of the sea both above and below; recurring couples -- on the street everyone is paired -- in love, embracing or half-embracing, whatever the heat; and the solitary figure in the window, usually female, framed by a mat of hot air and gazing off into a kind of languor, as if all time were designed for that purpose.

It is hard to get anything done. It is hard to focus. A thought is barely born before it melts, and in its place so lovely a void one could hardly have guessed emptiness so attractive. We swim now, in the great hot pool -- not cooling off, merely drowning our wetness in a greater wetness -- while next door the Sisters sing their Aves in the totally dark convent. The other night we heard the giggles of a host of small girls, and leaning on the balustrade in what must surely be the classical Brazilian pose, found -- instead of a children's party as we had thought -- the Sisters themselves, those whom we have seen at dusk, silently reading their breviaries under the cassia trees, now swinging on the swings, black robes flying. A wonderful subject for Pegi Nicol, had she been alive to momentarily lay aside her bright jujube colours and try the inky ranges of blues and greens.

I think of her now, perhaps, because her joyful, bright oils, bursting with life, somehow parallel all this tropical exuberance. And once reminded of her, I see again her posthumous show at the National Gallery of works painted when she was dying -- beautiful, brilliant, large canvases, filled to overflowing. It was as if the lethal, proliferating cancer shells within her had been transformed into a multitude of life-giving images which made dance the grey air of the gallery.

And because our reception rooms are like the shell-white grottoes where mermaids might sober up after a drunken night, a large Nicol of girls gardening and bending in a profusion of colour would shed a warmer light in all this green and white. A Nicol, a Lillian Freiman, and a great Bonnard....

'There is an irony to moving: while the primary change seems to be an external one, it is often the subtle, internal one that is the most profound. The more exotic the locale, the more exotic the inner change. Canadian poet P.K. Page tracks the course of this transformation in her book Brazilian Journal. In 1957, Page moved to Brazil with her husband, where he was assigned as Canadian ambassador. Loath to move there at first, she is slowly drawn in by Brazil and soon comes to love it. Gradually, a change takes place. While a writer by trade, Page begins to gravitate towards the visual, becoming entranced by Brazil's natural beauty, eventually turning from poetry to drawing and painting in an effort to capture her surroundings.

'Despite being seduced by the outer world, Page's journal entries remain rich in observation. Each page luxuriates in description of the nature – an insect with ''black lace wings and a green brocade head and a noise like a DC-3 revving up'' finds its way into Page's bedroom, the world ''throbs'' with green, and a ''wild palm leggy as colts'' appears before her on a bay. Most of Page's entries are filled with this kind of reverent, indulgent description, roping the reader in and making Brazil's beauty visceral. In fact, Page's writing is often observational at the expense of the personal – the reader rarely, if ever, is allowed into her inner life, though this doesn't mean it isn't there. Indeed, Page, who passed away in 2010, apparently excised many of her more reflective passages while preparing to publish her journals, choosing to edit out some of her darker thoughts about Brazil and about her inability to write poetry.

'There are certain passages that make the reader chafe, including ones in which Page complains about lazy servants, and uses outdated, racially charged language. She also makes observations about Brazil's prejudiced, divided society, which, while uncomfortable, serve to capture Brazil's complexity. Nonetheless, despite being very much a product of her time, Page adjusts to the strange new environment with poise, and it is clear that something about Brazil makes Page feel more alive. ''Something mad is happening to me,'' she writes. ''I seem to be falling in love with the world. And something in me is afraid. It is hard to know joy from pain – just as it is hard to know hot water from cold, if either is hot or cold enough.'' Anyone who has gone somewhere new and has been touched profoundly by the place will be able to relate to Page.

'Brazilian Journal should appeal to a wide array of readers. Poets, naturalists, language enthusiasts, and fans of Page's work alike will enjoy, and perhaps be awakened by it.'

'Elegant, rigorous, fresh, P. K. Page's work sings with a voice of independent character and maenad conjecture. It is a creature that lives on its own terms and terrain. It is startling, authoritative, and anti-sentimental, able to bear cool as well as passionate gazing at our own species. Her poems are always thinking -- each line is thinking, while its six senses remain impeccably alert. Her poems live by wit, wisdom, sass, suspense and a muscular lissome synapse and diction. They are daring in scope, meticulous in accomplishment, and boldly moral -- with a lovely flavour of amoral verve! We fall under the charm of her reasoning, of her fecund, fastidious imagination, of her many musics, and of her necessariness to us, her essentialness.'