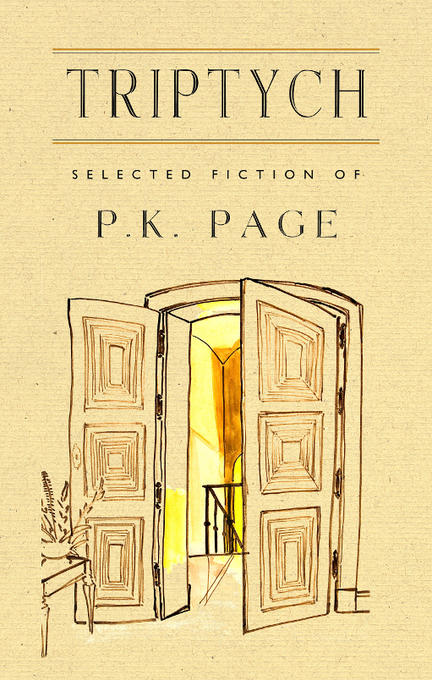 Combining her novel, The Sun and the Moon, with twelve short stories and a collection of brief linked narratives, Triptych: Selected Fiction of P. K. Page presents an assortment of poet-artist P. K. Page's most insightful and provocative fiction.

Elizabeth Popham is professor in the Department of English Literature at Trent University in Peterborough, Ontario. Her scholarly editing includes collections of the letters of E.J. Pratt and A.M. Klein.

Veronika saw the old woman fall. She couldn't prevent it. She was as helpless as if she were falling herself. She felt with excruciating clarity the old woman's foot slip inside her shoe, saw her pitch forward, extend her arms, and crash down the steps. Slow motion. The sight was horrifying.

Veronika was there when the old woman lay extended on the driveway. 'If I can get her up,' Veronika thought, 'we'll know how badly she is hurt-whether or not she needs to go to emergency.' Veronika didn't like the responsibility. Wasn't sure she would know what to do if the old woman's leg were broken or her collar bone or hip. Wasn't this the sort of thing that happened to old bones? They grew brittle and cracked.

And these must be old bones. Veronika guessed her to be in her late sixties. She watched as the old woman slowly pushed herself into a sitting position; noticed the quite beautifully set moonstone ring on her engagement finger. Veronika thought the old woman behaved as if she were entirely alone in the world-unobserved. As if the driveway on which she had fallen led only to an empty street in an empty city. In fact, except for Veronika, there was no one about. The old woman looked dazed. Veronika wondered if she had suffered a slight concussion or a small stroke for she didn't seem to be aware of Veronika.

She was talking to herself. 'Hurt,' she said, and then, 'Badly?' she asked herself as she stretched each leg ... her stockings in ribbons. Her expensive shoes were Italian, Veronika thought. She felt she had seen her before somewhere. At the symphony or on the bus. Veronika couldn't be sure which, and as she continued observing she felt the old woman had a slightly familial look. Would her mother have looked like that if she had she lived so long?

The old woman rubbed her shins and then, slowly again, got to her feet, shrugged her shoulders, turned her head side to side, testing. Veronika noted the excellent cut of her coat.

She noted again that the old woman seemed unable to see her. Didn't want to see her perhaps. Who enjoys such moments of humiliation? Veronika watched her take a step, then another, and set off down the street, slow, but very erect.

With her deeply searching observations and trippy, winding way with words, P. K. Page was ahead of her time.

Renowned Canadian poet P. K. Page wrote a great quantity of spellbinding prose in her time, in addition to the poetry that made her famous. Edited and with an introduction by Elizabeth Popham, Triptych collects several such stories, illustrating Page's immense literary talents.

Ranging from loving romances to speculative fiction, these stories run from one end of the genre spectrum to the other. In 'Unless the Eye Catch Fire,' a luminous apocalypse begins when the narrator suddenly sees that the grass is 'unexpectedly emerald'; later, the ground becomes so hot to the touch that a global drought commences. Told through journal entries in which the narrator inevitably loses track of the date, the story is simultaneously heartbreaking and beautiful. Similarly, 'Crayons' takes on a somber note, but with more subtle undertones. The child narrator notices 'the man [her mother's cousin] married' as he shows signs of emotional abuse, and utilizes crayons to reveal her dark feelings and observations.

The opening tale, a novella entitled 'The Sun and the Moon,' sets the emotional scene for the collection as a whole, but it differs from the other stories in its romantic style. Kristin is swept away by artist Carl, but over the course of the story she loses herself in the stillness of nature. It's a story of how empathy taken too far can be destructive, and its themes are more apparent than the themes of other stories in the book. The subtlety of the majority of the tales creates an unsettling atmosphere that lingers even as it penetrates the psyche.

The emotional mosaic of Triptych also lends itself to intellectual explorations of memory, art, and the environment. Page's black-and-white illustrations, paired expertly with particularly poignant stories, add to the solemn feel of the book. With her deeply searching observations and trippy, winding way with words, P. K. Page was ahead of her time.