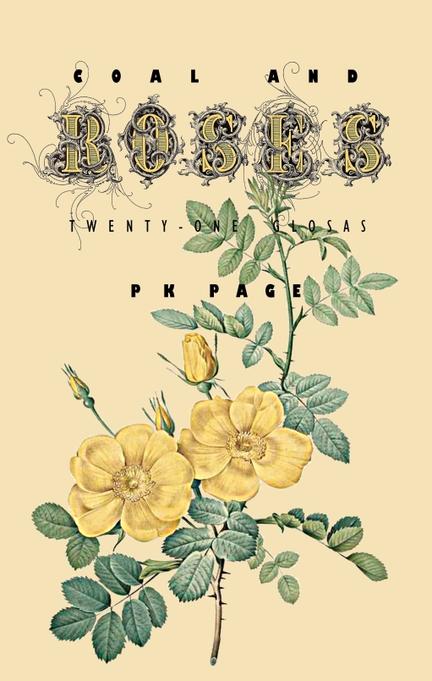 Coal and Roses allows the poet space to both research and to create, looking simultaneously to the past and to her hopes for an uncertain, metaphysical future.

Included are a series of 21 glosas, borrowing from the work of Ted Hughes, John Ashbery and Thom Gunn, amongst others. A masterful display of linguistic dexterity, Page assimilates the pervasive complexity and the abundance of tradition that co-exist in the world of literature.

Hunt, hunt again. If you do not find it, you
Will die. But I tell you this much, it
Is not under the stone at the foot
Of the garden, nor by the wall at the fig tree.

You have the whole garden to search in.
So begin. Begin now. Look behind every
shrub, turn up stones if
necessary, dig deep in the black
soil. Do not let night
interfere. Use a lamp to
light the darkness up.
There is no time to lose if
you are to succeed, so
hunt, hunt again. If you do not find it, you

may be sent to 'Coventry'.
Not pleasant.
No joke. But worse
is indeed possible. So look.
If you need glasses put
them on. Now. In that
way you should not even miss a bent
stalk. I cannot really
talk, nor mention what
will die. But I tell you this much, it

is not where or what you think --
in the woodshed, for instance, and not
behind the wheelbarrow nor in
the compost. Don't
waste your time
thinking where you would have put
it, had you been asked. You
weren't asked. But it -- let me assist
you this much in your pursuit --
is not under the stone at the foot

of the broad leafed maple. So stop
your wild surmises.
Time is running out and,
as your life
depends upon finding
it, search meticulously.
And good luck, I'd like you to
succeed.
Remember, not in the greenery
of the garden, nor by the wall at the fig tree.

'Though we were not to know it, Coal and Roses was the last book to be published by P.K. Page, appearing months before her death at the age of 93. Therefore it marks the close of a long and creative life. How heartening to be reminded that creativity, zest and curiosity can endure, even flourish, into great old age. Coal and Roses is wholly unusual and possibly unique. It's a collection of 21 glosas -- a glosa being an intricate difficult form. Each poem begins with four lines from another poet -- Anna Akhmatova, Thom Gunn, Zbigniew Herbert and Ted Hughes all feature -- and those four lines are then spun and meditated upon by Page herself, to form a new poem, where every stanza closes with a line from the master. The result is a history of poetry, a kind of memoir and a homage from one nearing life's end, to her forebears and colleagues. It is a fully achieved project, which does what literature does best -- abolishes the borders of life and death, time and culture and language, and sets all in a great conversation.'

'Infused with the echo of literary voices, Coal and Roses provides a sense of unwavering clairvoyance. Lines such as Jorge Luis Borge's ''there is a door I have shut until the end of the world'' from ''The Last Time'' become the fibres of an incessant philosophy.'

'In Coal and Roses, P.K. Page explores the subtle yet poignant strength of intertextuality. Through her captivating execution of the glosa (a fourteenth-century poetic form that uses borrowed lines), Page invokes the words of her predecessors (in italics) to capture the nuances and facets of the most mundane experiences to overarching meditations on life and the human condition.

'The decadent imagery in ''Ah, by the Golden Lilies'' spawns from the hues of Jimenez's poem ''Yellow Spring'' as it beautifully illustrates Jimenez's golden world. The speaker oscillates between her intrinsic knowledge of her childish bewitchment with Jimenez's ideal, ''my young head full of follies / ah, by the golden lilies,'' and the continuous desire to recreate this idyllic world for her own mental delight. ''I trail my golden fingers -- / for I am Midas' daughter -- / in the tepid golden water.'' The speaker's keen awareness of her ''Jimenezian'' influence unveils the way in which we as readers borrow and perpetuate the visions and creations of others. Page's poem becomes an Eden, Virgil's Arcadia, and Dante's Paradiso.

'In the title poem, ''Coal and Roses'' Page contextualizes the strength of Anna Akhmatova's words. Though Page's poem explores the most morbid aspects of our age -- ''car bombs account for many, cluster bombs. / Madmen shoot up classrooms, shoot themselves'' -- ''Coal and Roses'' ends in a kind of exaltation. The poem is distilled down to a pure sense of being and existence that is undeniably present and shared by all of humanity. ''We share a heartbeat . . . this quiet clock, unnoticed day by day, / But wild in our breast for centuries.''

'Infused with the echo of literary voices, Coal and Roses provides a sense of unwavering clairvoyance. Lines such as Jorge Luis Borge's ''there is a door I have shut until the end of the world'' from ''The Last Time'' become the fibres of an incessant philosophy.'

'A witty, musical writer, Page is equally at ease musing playfully on the power of imagination, writing of love and loss, or reflecting gravely on the environmental crisis. Though she never shied from darker subjects, Page was at her best when celebrating the sensuous beauty of the world, as in the following vivid passage, in which she recollects living in Brazil: ''Beneath the cassia boughs / where fallen yellow blossoms / reflect a mirror image / I barefoot in the petals / trample a yellow world / while small canaries flutter / over the lotus pond.'''

'In these poems, Page is clearly enjoying lyrical conversations with those who have inspired her, and these conversations provide a springboard for her creative transcendence.... Page and her contemporaries threw the door open for Canadian poets from the 1960s onwards to pursue their own creative avenues freely.'

'A Companion to the Order of Canada, one of Canada's highest civilian awards, PK Page brings her excellent expertise to the table with Coal and Roses. An exploration of language using the concept of Glosas, she discusses poetry by channeling sources of many other famous poets to execute her work, staying true to the original while getting her message across with fine technique. ''On a Far Shore'': It is summer, early evening / stars beginning / no dog barking. / The morning star / promises daylight, / and the moon is full. / Yet darkness fights for itself. / It has its methods, / is infinitely resourceful. / The night unravels its blue wool.'

'Page dedicates Coal and Roses ''To you, my readers, whoever you be.'' In the twenty-one glosas that follow, Page demonstrates her skill as a poet who can expand with wit and verve on many themes while following the difficult form of the glosa in which, as outlined in a prefatory note, the four lines of a borrowed quatrain from another poet are used to terminate each of her own four ten-line stanzas. In this more challenging form, the sixth and the ninth lines must rhyme with the borrowed lines, and, of course, the poet's work must measure up to or exceed that of the poet on whose poem she builds her own. Following all these intricate requirements while intertwining her own verses with the borrowed lines, Page begins with Robert Penn Warren's poem ''Treasure Hunt'' to create her own poem, ''The Search,'' and ends with Anna Akhmatova's apocalyptic ''Everything is Plundered'' to write a triple glosa using three different quatrains from that poem to provide the scaffolding for her own title sequence.'