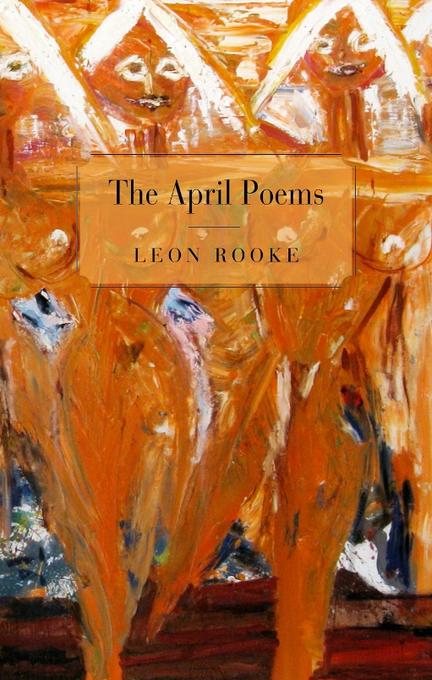 Leon Rooke's latest collection of poems concerns itself with an irrepressible heroine, adopting a variety of distinctive perspectives on her life, her loves and her losses.

– What was it that attracted you to April”
– How I was made dizzy through love. How I came to see beauty
in the strangest things. How modern art suddenly made sense. Her
pluck, her prink, her plumelets. Her elegant feet.
– That's it”
– Clothes on the body, then the floor. I was eighty miles away
and saw her naked in bed. She was saying smart things. I licked blue
plates in cheap diners, thinking of her. Knowing that she was smarter
than me. She was an intellectual colossus, big, big, and bigger. Call
her up, you got busy signals, you got guys from Nantucket, Singapore,
the Darwinian Isles. Because of her I could speak the language of wild
dogs. Gypsies jumped from blackberry fields, shouting her name. Bees
sacrificed their own air time to fly with her. Even wasps.
– What was it about you that made her keen”
– She liked digging me out of holes, where insects buried me. I
introduced her to invisible birds which made nests out of her hat bands.
I was a man of action who went out nights in a flying suit, in dyed
underwear, stopping trains that otherwise would crash. I diverted
streams so they'd trickle by our bedroom. I was savvy in the kitchen,
slicing beets. I was a brave son of a bitch in the workplace,
turning hot-headed thugs into limited-edition songbooks, Fords
into schooners on Lake Huron. I enacted legislation making Mother's
Day an extended foray through Greek isles.
– So you're saying your marriage worked out”
– Like the beauty of pure math. What did she say”
– Like juggling bricks in a hurricane

In Leon Rooke's imaginative, surreal world, it is always April.

In The April Poems, Leon Rooke bridges the gap between poetry and fiction with an array of poems that, while wildly experimental at times, form an overarching narrative about a woman named April.

The collection is a kind of fictional biography told through individual poems, a conceit worthy of housing a book's worth of experimentation. It provides a structure in which Rooke's blend of unique voices and magical realism can shine while keeping the larger perspective of the book in focus.

As the word "experimentation" implies, not all of Rooke's efforts succeed. There are some longer works that veer a bit too far off the main path. Likewise, some of the short, one-note poems, such as "April's Continuation of the James Tate Poem 'Lewis and Clark Overheard in Conversation'" (a clever play on the original poem, which, as with Rooke's continuation, consists solely of the line "then we'll get us some wine and spare ribs"), may or may not catch a reader's fancy.

That said, all of the far-ranging styles and techniques make the moments that hit home that much more effective, as in the glimpse into domestic life provided in "April's Bad Husband Day": "April and the children looking / chills raking the spine / knowing they knew him / from somewhere"

In "April's Clunker Car," an encounter with a tow-truck driver who confesses to having wished he'd married April years before gives rise to thoughts of what might have been: "Yup, well, here you go, he said, / pulling into a hustling hub, / next time you're in trouble / breathe deeply and I'll be on your bumper / like a hurricane."

Unlikely as it is that every one of Rooke's poems will hit the mark for individual readers, it's just as unlikely that readers will not be amused, or moved, by any of them. Rooke is playful, but skilled enough to pull off most of what he attempts.

Rooke is known for experimentation, and for the distinct voices of his characters. He has received acclaim for many of his works, particularly his novel Shakespeare's Dog, which has also been staged as a play. Rooke has been invested into the Order of Canada, and has received many other awards and prizes, including the Gloria Vanderbilt Carter V. Cooper Fiction Award in 2012.

The April Poems is a novel (pun intended) way of telling a story--episodic, disjointed at times, full of imagery and surrealism. It is a grand experiment, one that readers are encouraged to assist in conducting, and one that many will find successful.

'One of the most touching aspects of this collection is that the poems in April's voice seem altogether quieter, almost wistful, and are distinct from the viewpoints of those (including Sam) who would mythologize her, or whose grandiose descriptions belie the depth of her soul. Her vulnerability, ultimately more endearing than any exploit, is revealed.... Even seen through multiple viewpoints, it's clear that April is more than the sum of these parts, as is this collage-like collection. Like that long and happy marriage, April is here to stay.'

'Leon Rooke's The April Poems are a bit like walking into a batting practice with the home-run champ. Leon Rooke's free verse musings on April explode off of the bat with the confidence of someone who always knows where the sweet spot lays. This guy is used to knocking them out of the park.'

'Rooke takes the everyday happenings of a domestic relationship and makes them wonderful, not by elevating or magnifying them, but by insisting on them just as they are -- squalid and splendid, banal and profound, playful and earnest'