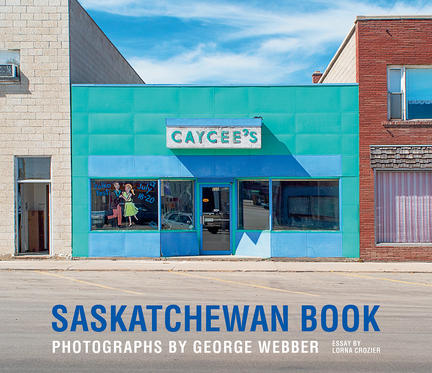 An evocative collection of contemporary photography that shines a light on the charm and disintegration of small towns in Saskatchewan.

Captured over 30 years, the 200 images in this finely wrought exhibition document prairie landscapes and rural structures like no other in recent memory. With skill, sensitivity, and a renowned eye for detail, documentary photographer George Webber once again transports the viewer with his lens across time, geography, and history.

Bright colours, sun-baked facades, endless horizons, and straight edges are all beautifully haunted by the shadow of time’s inevitable decay and nature’s slow embrace of abandoned human settlements. The varying shades of prairie-blue skies can hum with optimistic vibrancy, while fists of cloud can march toward an unknowable front.

Saskatchewan Book shows us that small prairie towns remain beacons of affection and bastions of memory, all the while succumbing to the enigmatic fate that eventually enfolds all living things.

"What’s amazing about these photographs is how much narrative and emotion are contained in the sparsest, most stripped-down of the found remnants of men and women who are not on site. The pictures do the work of poems and one of the briefest of poems at that, the haiku." -Lorna Crozier, author of The Book of Marvels and Small Beneath the Sky

What the Soul Doesn't Want