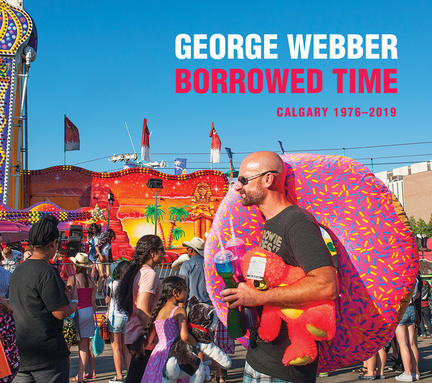 An intriguing exhibition of documentary photography and micro-essays highlighting the growth and evolution of one of Canada’s most interesting, and complicated, cities.

Shortly after completing university and starting work in 1975, a young George Webber borrowed a camera and took a stroll in downtown Calgary. From that point on, he discovered how his affection for the city could be transformed and harnessed through photography.

“A picture is worth a thousand words, and in this B-side portraiture of Calgary, George Webber captures the city in all its fallible soft spots. Ice-cold lonely nights of storefront hope; the glory days of Stampede Wrestling; the strange, colourful mosaics of the Calgary Stampede; and a hundred identifiable places of everyman. These are places you know, people you know, feelings you’ve had gazing on your own city.”
—Micheline Maylor, Poet Laureate Emeritus of Calgary (2016–18) and award-winning author of The Bad Wife, Little Wildheart, Whirr and Click, and Full Depth: The Raymond Knister Poems

“Experience Calgary through the eyes of George Webber and see our mercurial city captured in slow, vibrant motion. Webber’s striking photographs tell stories of this place and its people with insight, humour, and heart.”
—Shaun Hunter, author of Calgary through the Eyes of Writers

“This remarkable collection runs from the punk-hair mohawks of the 1970s to the pale goth roller-girls of later years as the black-and-white images give way to splashes of colour just as surely as Stampede Wrestling gives way to the Calgary Stampede: garish cotton-candy pinks and Tilt-a-Whirl rides, the gaping mouth of a plastic clown, a happy receptacle for our garbage. It is a credit to the singular talent of Webber that he makes such kitsch appear poignant and haunting.”
—Will Ferguson, award-winning travel writer and author of Happiness, 419, and The Finder

“The story of the street. History caught in a glimpse. Nouns that no longer exist. This is a legacy of landmarks – a sign of what’s to come – undone. Lost to the lost and found – found to the found and lost. This pictorial documentary exposes the extraordinary in the ordinary and the ordinary in the extraordinary. It is much more than a book of pictures – it tells us a story of ourselves – it makes us look inside.”
—Sheri-D Wilson, Poet Laureate Emeritus of Calgary (2018–20), internationally known performance poet, and award-winning author of YYC POP: Poetic Portraits of People; A Love Letter to Emily C; The Book of Sensations; Re: Zoom and numerous other collections

“Brilliant of George Webber to ignore the skyscrapers and the men in suits and all the other measures of sleek success, and to concentrate instead on Calgary’s many other selves and moods: the fondness for something showy and loud and crass and gauche; something that can be celebrated in the suite of colours that neon comes in; that shows some leg; that promises you some glory at a cut rate; that often falls flat and is run right over.”
—Fred Stenson, award-winning author of Who by Fire, The Great Karoo, Lightning, The Trade, and numerous others.

New Books on Art and Artists