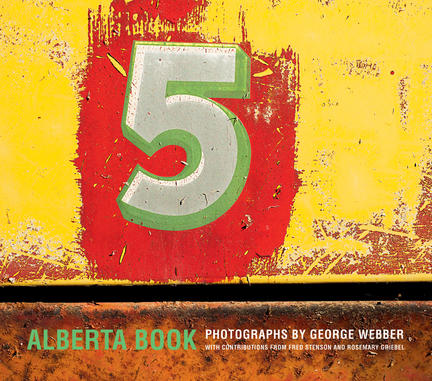 “The prairies are Webber’s physical and spiritual home. Born and raised in Drumheller and now living in Calgary Webber has a palpable connection to the places he photographs. His interpretations are direct, sincere and invested with a sense of history and intimacy that imbues his photographs with a heightened, surreal sense of colour and ambiguity that moves them from the ordinary into the realm of the extraordinary. Haunting, touching, evocative and enigmatic, these images occupy a place somewhere between everywhere and nowhere.” —Tobi Bruce, Curator at the Art Gallery of Hamilton

The 200 colour photographs assembled in Webber's latest portfolio, Alberta Book, have been selected from an archive of work spanning nearly 40 years. In this collection viewers will find deteriorating signage that remains almost garishly bright; chrome details from vintage automobiles that still sparkle in the sun; forgotten buildings that have fallen into gentle disrepair; hand-painted window lettering that goes unread; and abandoned landscapes that echo with the whispers of residents long gone. Set against the bright blue Alberta sky or rolling clouds bursting with prairie thunder, these images glow with warm affection for the humble and reticent structures of Alberta’s past.