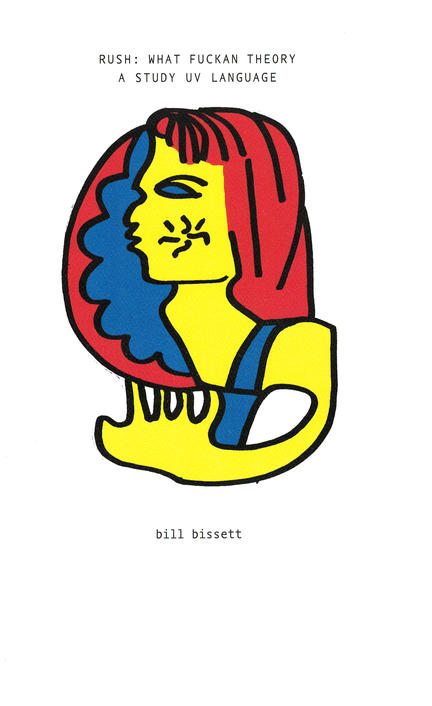 The publication of bill bissett's Rush: what fuckan theory; a study uv language in 1972 firmly ushered Canadian poetics into the postmodern era. Out of print for 40 years - and reissued here complete with an interview with bissett about the book's creation and a critical afterword by derek beaulieu and Gregory Betts - Rush embodies a collagist, multi-conscious approach to art that recognizes no division between the work and the world, the author and his sexuality, his breath, his influences; the theory and the practice. Arguing that "a new line has startid," Rush captures the urgency of a new model of production that resists the closure and mastery of any one mind. It is an elegant rejection of aesthetic ego and all presumptions of authority. Rush: what fuckan theory; a study uv language is a vital, vocal protest against business as usual and the exploitation of the individual from one of Canada's most important avant-garde poets.

bill bissett
originalee from lunaria ovr 300 yeers ago in lunarian time
sent by shuttul thru halifax nova scotia originalee wantid 2
b dansr n figur skatr became a poet n paintr in my longings
after 12 operaysyuns reelee preventid me from following th
inishul direksyuns
?bill bissett
bill bissett garnered international attention in the 1960s as a pre-eminent figure of the counterculture movement in Canada and the United Kingdom. In 1964, he founded blewointment press, which published the works of bpNichol and Steve McCaffery, among others.
bissett’s charged readings, which never fail to amaze his audiences, incorporate sound poetry, chanting and singing, the verve of which is only matched by his prolific writing career?more than seventy books of bissett’s poetry have been published.
A pioneer of sound, visual and performance poetry?eschewing the artificial hierarchies of meaning and the privileging of things (?proper” nouns) over actions imposed on language by capital letters; the metric limitations imposed on the possibilities of expression by punctuation; and the illusion of formal transparency imposed on the written word by standard (rather than phonetic) spelling?bissett composes his poems as scripts for pure performance and has consistently worked to extend the boundaries of language and visual image, honing a synthesis of the two in the medium of concrete poetry.
Whether paying tribute to his hometown lunaria or exercising his native tongue dissent, bissett continues to dance upon upon the cutting edge of poetics and performance works.
bill bissett was recently a featured poet on the Heart of a Poet series, produced in conjunction with Bravo! TV.
Among bissett’s many awards are The George Woodcock Lifetime Achievement Award (2007); BC Book Prizes Dorothy Livesay Prize (2003) peter among th towring boxes / text bites; BC Book Prizes Dorothy Livesay Prize (1993) inkorrect thots.

derek beaulieu is the author of five books of poetry, three volumes of conceptual fiction, and over 150 chapbooks. His critical edition (co-edited with Gregory Betts) of bill bissett’s RUSH: what fuckan theory will be published in 2012. beaulieu teaches at the University of Calgary, the Alberta College of Art, and Mount Royal University.

Lori Emerson is an assistant professor in the Department of English at the University of Colorado at Boulder. She writes about and teaches electronic literature (especially digital poetry), experimental American and Canadian poetry, the history of computing, and media theory. She is co-editor, with Darren Wershler, of The Alphabet Game: a bpNichol Reader (2007).

John Riddell is the author of Criss-Cross (Coach House, 1977) and numerous other volumes of visual poetry and prose. An early editor of grOnk, Ganglia, and Phenomenon Press, his work has been included in magazines like Kontakte, Descant, and Ganglia from the 1960s to the present.

Other titles by bill bissett

Other titles by derek beaulieu

frogments from the frag pool

Outsider Books: This Is a Party I Would Go To

The author of new novel Skin House on other books featuring outsider perspectives.