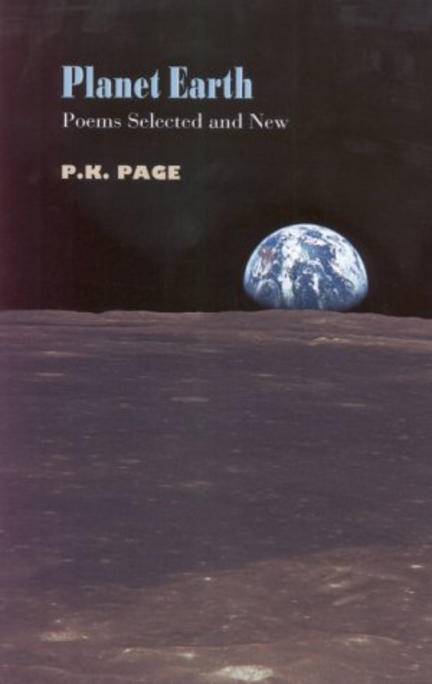 'P. K. Page shares with her 17th-century predecessors, such as John Donne, a refusal to separate head and heart. What you hear in her work is the sound of intelligence brought crisply into focus.'

'Few poets in the last 60 years have demonstrated as much subtlety of thought and honesty of feeling as P.K. Page. Page emerged during Canadian poetry's fabled golden age (arguably 1945-1965), and today still remains one of the world's most affecting poets.

'Planet Earth brings together works from her long career, and, as such, does an excellent job of underlining Page's contribution to Canadian literature. Whether she is depicting life's elaborate carnival with broad stokes of language, or precisely dissecting folly with a bladed pen, Page always cuts directly to the heart of the human condition.

'She remains a frustratingly square peg for categorists, however. Her work is too protean, or simply too good, to be dismissed or embraced for just one of its many concerns, styles or forms. In Planet Earth, Page shows that she can rival T. S. Eliot as a satirist with poems like ''The Permanent Tourists'':

Look, you can see them nude in any cafe
reading their histories from the bill of fare,
creating futures from a foreign tea cup.
Philosophies like ferns bloom from the fable
that travel is broadening at the caf? table.

'Or create an evocative portrait as she does in ''Schizophrenic'':

Malleable she wore her lustre nails
daily like a debutante and smoked,
watching the fur her breath made as they joked,
caught like a wind in the freedom of their sails.

'Page's primary concern in recent years, however, is revealed by the title of the collection. Planet Earth is meant to be an encompassing label, hugging to itself all that is earth-bound and human, while also drawing specific attention to Page's concern for the environment (an address Page gave at Simon Fraser University is included in the collection for this purpose). Whatever her focus, however, Page's remarkable work holds the reader's attention by its sheer, understated force.'

'P.K. Page is at once our most revered and our least understood poet. She stands alongside A.M. Klein as one of the finest writers of the group of Montreal-based modernists that emerged in the forties and fifties, but she has yet to be critically assimilated, largely because her works are so diverse -- and because she has never lapsed into a single signature style: she does prose poetry, formal poetry, free verse, social poems, psychological poems, and transcendental visionary poems, infusing anything she writes with an unmistakably precise sense of language. Her poems were collected in 1997 in the two volumes of The Hidden Room. Planet Earth is a much slimmer book, a selection from her career that offers a few typically exquisite new poems, the gem of which is the witty, discursive A-Z autobiographical, which takes readers from ''afterwards'' to ''zero'' by way of computers, love, New Guinea, Alberta, and algebra:

Arithmetic bored me --
I thought it a tool for housewives --
but in my teens
the tidy
algebraic knot
the perfect puzzle
the code of x plus y
the beautiful clean
equilibrium of equations
fired me.
I was a sudden mathematician.

This love was purer
than my passion for pig Latin
and those difficult linguistic
'pigs' that followed.

Should I, instead, have been
a cipher clerk?

'Eric Ormsby is an attentive and sympathetic reader of Page's work, and it's hard to imagine a better editor for this selection. This is very much a poet's choice of Page's verse; academic trappings, chronology, and original sequence are ignored in favour of letting the poems be poems. As a result, Planet Earth is a readable, varied, and convincing testament to Page's powers as a poet.'

'Elegant, rigorous, fresh, P.K. Page's work sings with a voice of independent character and maenad conjecture. It is a creature that lives on its own terms and terrain. It is startling, authoritative, and anti-sentimental, able to bear cool as well as passionate gazing at our own species. Her poems are always thinking -- each line is thinking, while its six senses remain impeccably alert. Her poems live by wit, wisdom, sass, suspense and a muscular lissome synapse and diction. They are daring in scope, meticulous in accomplishment, and boldly moral -- with a lovely flavour of amoral verve! We fall under the charm of her reasoning, of her fecund, fastidious imagination, of her many musics, and of her necessariness to us, her essentialness.'

'One thing is certain: no better volume of poems appeared in Canada in 2002.'

'Planet Earth is essential reading for anyone professing a serious interest in Canadian poetry.'

'P. K. Page (to paraphrase her remarks on George Johnston) asks difficult, serious questions neither she nor we can answer. She celebrates the world of our comings and goings. She reminds us that we are human and that we can love one another and she rarely forgets or lets us forget that ''No man may him hyde / From Deth holow-eyed.'' '