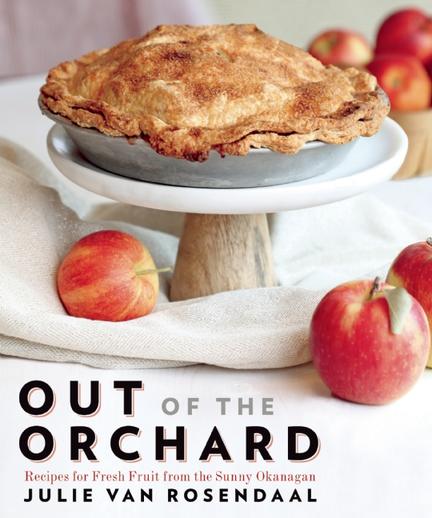 A brand-new collection of eighty-five contemporary recipes that celebrate tree fruit from the orchards of the Okanagan.

BC's Okanagan Valley boasts rich, fertile soil, endless days of summer sun, and a pristine lake fed by pure mountain streams. This magical combination makes it home to some of the most delicious fruit in the world. The BC Tree Fruits cooperative is owned by more than 500 local grower families, and their apples, peaches, pears, cherries, and other fruits are sought out by thousands every season.

This beautiful cookbook by bestselling author Julie Van Rosendaal is a collection of the absolute best, triple-tested recipes for your annual bounty of Okanagan fruit. In addition to classic recipes for pies, cobblers, cakes, and preserves, Van Rosendaal also shares less conventional recipes for fruit in salads, soups, and even main dishes. With photos throughout and primers on the best ways to use different varieties of each type of fruit, this is the Okanagan fruit cookbook for today’s locavore.

Julie Van Rosendaal was an avid cook as early as age three. When her father, known for his insatiable sweet tooth, found out he had high cholesterol, Julie took her expertise in the kitchen and began creating healthier and low fat recipes for cookies and sweets. After spending years doing research and experimenting in the kitchen, Julie developed a knack for taking recipes of foods that she craved, typically high in fat, and creating a healthier version. At the same time, she realized that dieting was silly and began to live on her own terms. She simply cooked and ate healthier versions of the foods she loved. In addition to giving her ideas for health-conscious cookbooks (which would eventually become bestsellers), this change in lifestyle led Julie to lose 165 pounds—a testament to the effectiveness and practicality of her recipes and food philosophy. Quickly the demand for her delicious low fat recipes became so great that she opened her own low fat bakery in Calgary, Alberta. With the great success of this bakery, Julie decided to share her low fat recipes with the world—in One Smart Cookie, among other cookbooks. Referred to as the “queen of the skinny sweet” and the “poster girl for low fat cooking,” Julie is in high demand for her knowledge and expertise. She has appeared on numerous television and radio shows, led many cooking demonstrations across North America, and regularly contributes to newspapers and magazines.

"Finding inspiration in the every day is the cook’s greatest challenge. Happily, a new book of recipes by Calgary food writer Julie Van Rosendaal reveals new ways to work with the humble apple, as well as other beloved British Columbia tree fruits." —Edmonton Journal

Julie Van Rosendaal talks about the power of pies and the versatility of tree fruits with the Vancouver Sun, and shares three scrumptious recipes from her new cookbook.

"Julie Van Rosendaal makes a living writing smart and tasty recipes, and her latest cookbook, Out of the Orchard is one of the smartest and tastiest yet." —Saskatoon StarPhoenix

Other titles by Julie Van Rosendaal

Signature Recipes from the City's Best Restaurants and Bars

All-New Recipes for Family and Friends

Bringing People Together with Food

In the Dog Kitchen

Great Snack Recipes for Your Dog

Cooking And Baking With Beans Everyday

All Your Favourite Cookies, Squares, Brownies And Biscotti... With Less Fat

The Essential Guide to Cooking on Your Own

A Healthier Approach to Snacks and Finger Foods

BC Books About Food

BC Books From Thompson-Okanagan

A selection of inspiring books just perfect for harvest time.

On Our Radar: The Summer Edition

Books with buzz all around the Internet and elsewhere.