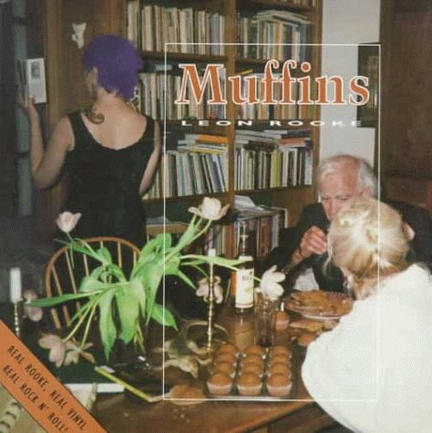 'Muffins is a square; it has a vinyl cover of a photograph of Rooke and his wife and another woman (their daughter?). The photograph-cover, if one ''reads'' it closely, shows the daughter reading a book; her back is facing her parents who are at a table eating -- or about to eat -- muffins. There is a book case stuffed with books ''arranged'' in a messy way. The photograph has in the middle a rectangle in white lines and the words in different typefaces (and colours): Muffins and Leon Rooke under Muffins. The effect is startling because I see photographs of books within the book itself. And I am thus aware that there is a carefully designed book-within-the-book. And I start thinking about the relation of the various elements I have mentioned. Is the cover the beginning of the book? Does it, on the contrary, tell a secret story? I see, finally, that I as reader or viewer must interpret the relations, must join -- or create -- the performance of interpretation. In a sense, then, I am writing a review of the photograph of the author. And I have not yet opened Muffins! My consciousness is whirling!'

Leon Rooke is one of the best reader / performers in Canada, certainly of his own fiction, and when you hear him perform the work of other writers, you're not so sure he isn't one of the best readers in the country, period. His theatrical inclinations go back to college where he majored in drama and then worked with a professional theatre in North Carolina for three years. 'I wasn't very good,' he cheerfully admits. 'I had difficulty learning lines.'

He still has difficulty with lines but it's a fortunate fault. In his latest project, a 45 rpm recording released by the Porcupine's Quill in Erin, Ontario, he takes advantage of his deficiencies. Rooke reads from 'Muffins', a short story that is part of a novel-in-progress. It's a tale about a poisonous family -- a mother, father and daughter -- whose ubiquitous disagreements assume the tone of gothic vengeance. The daughter is a bit odd -- she has purple hair, wears a necklace of live lizards and reads nothing but Heidegger. She also makes muffins named after her beloved philosopher, the recipe for which is included with the liner notes.

The eleven-minute-long record is a kind of sampler of what your reading life would be like if you were adventuresome enough to enter the wild terrain of Rooke country: ferocious and hilarious. This is not the reedy voice of W.B. Yeats barely rising above the bee-loud glade, or the parsimonious T.S. Eliot, thin-lipped and bitter. It's Rooke's ante-bellum, ribald, wonderfully enunciated narrative voice dolloping out venom and wit and wisdom in equal portions. In a short pair of lines he will make butter two radically different words: one a pout of buttah drawled all the way from Chapel Hill, N.C.; the other a two-syllable assault that implies some violence directed from father to daughter. Butt her, indeed! Nor is there any respect given to the written text; this is the story as it's being heard. 'I do see the performance aspect as a very different one from what happens when you're reading the printed page,' is the way Rooke explains why what he says doesn't always correspond to the written text included inside the record jacket. 'Usually what happens is I lose my place in the text so I extemporize until I find myself again.' He compares his method to a jazz musician doing a little riff. It's your turn for a solo once you've heard what the others have done, and it's all part of the same universe. When I'm extemporizing, it's not foreign matter. Although the lines may not be there in the printed text, it's working from the same notes, following the same theme.'

The reading was recorded in front of a live audience at the Rivoli on Toronto's Queen Street in April of 1995. It was originally twice the length acceptable on a traditional 45. 'Twenty-two minutes isn't a 45,' says Tim Inkster, who seamlessly edited 'Muffins' down to its current eleven minutes. 'Twenty-two minutes is an album, which is 33 1/3 and that was never the deal. When I heard it, I'm thinking 45, and I'm absolutely a purist. If you're gonna do it, you have to do it properly.' The most difficult part of the vinyl project was locating the plastic centres. 'We had a helluva time getting them. We tried all over and were only able to find 175 in Brampton. But then the computer guy in the shop put up a help message on the Internet and within twenty-four hours we had four messages, all telling us about the same guy in New York City. We phoned and he had several hundred thousand of these things.'

Inkster needed only 2000 for his pressing. In Rooke's estimation Muffins is 'a nice piece of packaging' and he's right. You get the 45 recording -- both A and B sides -- with silver lizards turning around the vinyl, a yellow centre, the full text of the Rivoli reading, a recipe for Heidegger muffins and a series of black and white photographs of three people who assume the roles of the chaacters in the story. All of this enclosed inside a tasty record sleeve advertising Real Rooke, Real Vinyl, Real Rock n' Roll. As Neil Young might say, 'Hey, hey, my, my, Rooke n' role will never die.'

'Rooke's recording, cut in a Toronto bar, has all the boozy effervescence of a one-man tour band. In an age when some writers attempt to take themselves seriously as performance artists, Rooke reponds by sending out a bootleg recording of one of his own beer-hall jam sessions.'