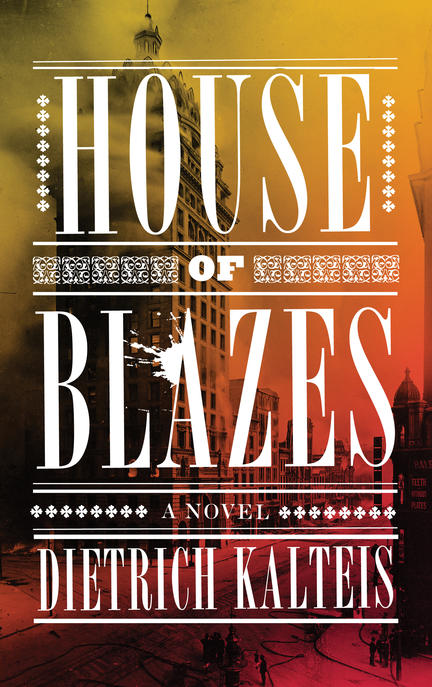 In the days before the great earthquake and fire of 1906, Levi Hayes returns from San Quentin Prison with a plan. After serving five years for the theft of $30,000 in gold coins from the San Francisco Mint, he’s ready to take back what’s his and exact revenge on the now-powerful Healey brothers who set him up and had his barroom, House of Blazes, seized by court order.

To get back his bar Levi recruits his nephew, Mack Lewis, telling him the gold coins wait hidden behind one of its cellar walls. Their wild scheme propels them through saloon halls, gambling dens, back alleys, and brothels before it backfires. In lock-up as the earthquake hits, Levi and Mack must escape the collapsing building and burning city to get to the gold coins, with Quinn Healey determined to get his own revenge on them.

“Kalteis has written a gripping, gritty story of revenge gone awry, and has created an anti-hero who’ll stay with you long after the fires have gone out.” — Ian Hamilton, author of the bestselling Ava Lee Novels

“A high-octane adventure fuelled by vengeance, set during the San Francisco quake and fire of 1906. Kalteis masterfully evokes the eccentric characters and manners of the times, and the brawling decadence of the Barbary Coast.” — William Deverell, author of the Arthur Beauchamp series

“Kalteis offers a shoot-'em-up from the get-go, adding a twist by making the principal player a hard-to-cheer-for ex-con seeking revenge while in the middle of a natural disaster.” — Kirkus Reviews

“Populated with a diverse cast of well-drawn characters . . . this book is for readers who like their history gritty and action-packed.” — Publishers Weekly

“By the end, House of Blazes is a thrilling story of a revenge that gets derailed by a city-wide catastrophe.” — A Bookish Type