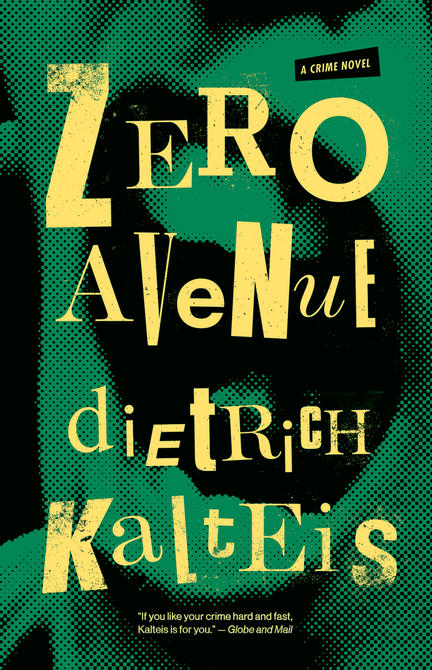 “If you like your crime hard and fast, Kalteis is for you.” — The Globe and Mail

Set to the cranking beat and amphetamine buzz of Vancouver’s early punk scene, Zero Avenue follows Frankie Del Rey, a talented and rising punk star who runs just enough dope on the side to pay the bills and keep her band, Waves of Nausea, together. The trouble is she’s running it for Marty Sayles, a powerful drug dealer who controls the Eastside with a fist.

When Frankie strikes up a relationship with Johnny Falco, the owner of one of the only Vancouver clubs willing to give punk a chance, she finds out he’s having his own money problems just keeping Falco’s Nest open. Desperate to keep his club, Johnny raids one of the pot fields Marty Sayles has growing out past Surrey, along Zero Avenue on the U.S. border. He gets away with a pickup load and pays back everybody he owes. Arnie Binz, bass player for Waves of Nausea, finds out about it and decides that was easy enough. But he gets caught by Marty’s crew.

“I urge you to take a ride down Zero Avenue in the Zambezi green Karmann Ghia with Frankie and her punk cohorts — you will not be disappointed! The early Canadian punk scene in Vancouver is written with such vivid tang it makes me wish I’d been there — only I wouldn’t have survived! Zero Avenue is written with Kalteis’ characteristic snappy style, with wise-cracking characters scoring sucker punches fuelled by adrenalin and delicious chunks of hash. This book is peppered with verve and great secondary characters — Rita is one of my faves — all in all, Zero Avenue is a treat!” — Lisa de Nikolitis, award winning author of The Nearly Girl, Between the Cracks She Fell, The Witchdoctor’s Bones, West of Wawa, A Glittering Chaos, and The Hungry Mirror

“Zero Avenue hits you punk rock hard and fast. No wasted words, visceral and brutal like being in the pit, this one will leave your ears ringing and you asking for more from Dietrich Kalteis. It’s the punk rock crime novel I wish I’d written.” — Eric Beetner, author of Rumrunners and The Devil Doesn’t Want Me

“Dietrich Kalteis does a brilliant job melding crime fiction with early punk rock history in Zero Avenue, and rocks the story off the page. The cast of characters are authentic and believable, especially his beautifully tough female protagonist, Frankie, who can spit on me anytime. This is punk noir, folks!” — David Swinson, author of The Second Girl

“Who wouldn’t want to read a ripping and rocking crime yarn set in the early days of Vancouver’s punk scene? A hard-nosed dope dealer, a desperate club owner, and a copycat bass player take our heroine (not to be confused with heroin) on one wild ride. Bravo! I couldn’t put this book down.” — Terry Fallis, two-time winner of the Stephen Leacock Medal for Humour

“If punk rock noir isn’t a genre, Dietrich Kalteis just invented it. And if it is a genre, then he just raised the stakes. Not unlike the name of his heroine, Frankie’s, band, Zero Avenue is a big middle finger to the establishment, expertly capturing a movement and moment in time that burned bright in its nihilism and fought fierce for its freedom. But that isn’t what makes Zero Avenue so special. Anyone can rage against the machine. What Kalteis manages, in the middle of all the drugs, sex, and general debauchery, is to display an unwavering, expert command of the art of storytelling. In this delicately violent portrait of the outsider, Kalteis infuses in each and every character, however repulsive and suspect, an undeniable humanity.” — Joe Clifford, author of the Jay Porter Thriller Series

Sam Wiebe (whose most recent novel is Cut You Down) recommends eight other crime novels set in the Pacific Northwest.