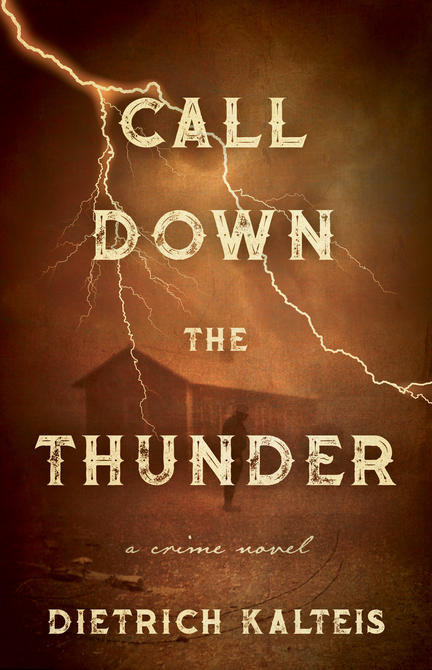 “Fans of historical crime fiction won’t want to miss this one.” — Publishers Weekly

Sonny and Clara Myers struggle on their Kansas farm in the late 1930s, a time the Lord gave up on: their land’s gone dry, barren, and worthless; the bankers are greedy and hungry, trying to squeeze them and other farmers out of their homes; and, on top of that, their marriage is in trouble. The couple can struggle and wither along with the land or surrender to the bankers and hightail it to California like most of the others. Clara is all for leaving, but Sonny refuses to abandon the family farm.

In a fit of temper, she takes off westward in their old battered truck. Alone on the farm and determined to get back Clara and the good old days, Sonny comes up with an idea, a way to keep his land and even prosper while giving the banks a taste of their own misery. He sets the scheme in motion under the cover of the commotion being caused by a rainmaker hired by the mayor to call down the thunder and wash away everyone’s troubles.

Excerpt: Call Down the Thunder: A Crime Novel (by (author) Dietrich Kalteis)

Sonny Myers narrowed his eyes against the gust, felt the rush of cold, the air crackling: static electricity churning and hellfire flashing inside the mass of black looming high over the flat land. The yard turning to a frenzy of whipping sand and debris. Felt like the end of times coming. Through the boiling wall of sand Sonny made out two sets of headlights coming on the county road. Could be coming for shelter from the duster, but something told him no. Reaching inside the door, he took for the shotgun and stepped off the porch.

Coming to the door, Clara asked what was going on.

“Just a blow.” He told her to get inside.

“What you gonna do, shoot it?”

His eyes slits, Sonny stepped into the yard, forcing his steps, having to lean into it, going toward the headlights.

Looked like two pick-ups stopped down by the mailbox, lights dim against the blasting sand. Doors opened and men got out. Nobody he knew. Best he could tell there were six of them, pulling hoods on. Two going to the bed of the first truck, pulling out a long cross wrapped in burlap. It had been soaked in kerosene and oil, Sonny smelling it from where he stood, halfway to the house. A couple of them moved to his left, heading for the side of the house, flanking him.

Sonny fired in the air, the only warning they’d get, popping in another shell. Leaving the two with the cross and the others by the trucks, Sonny went after the pair going wide around the house. Couldn’t see twenty feet ahead as the duster bore down. Hurrying around the side, his eyes searched for them somewhere ahead of him. One hand against the boards, he made his way around the back, staying low. Expecting an ambush. Ready to shoot if he had to. Getting to the far side before he smelled the smoke. Thinking it was the cross. Then he caught figures moving ahead of him.

“Halt,” he called, wondering what kind of thing was that to yell. Couldn’t shoot, knowing Clara wouldn’t stay inside like he told her. No point in shooting his wife. Catching sight of the flames, the cross burning down by the mailbox, the sound of car doors shutting, taillights pulling away.

Then Clara screamed from the porch, stumbling down the steps, hand on the porch rail, she moved along and found him, pointing to the barn. Sonny catching the flicker, another man running from it and crossing the open ground, heading for the trucks. Putting the stock to his shoulder, Sonny fired, pretty sure he winged the son of a bitch, reaching in his pocket for another shell that wasn’t there. The man chased after trucks and disappeared.

The dry boards caught fast, flames flicked to the roof beams and spread, the straw floor alight and swirling around. Bats flew around the rafters, chickens getting out of there. The mule screaming.

Handing Clara the shotgun, Sonny jumped down along the west side, swatting and kicking at the burning straw with his shoe. The heat like a wall, pushing him back. Slapping at the cuff of his overalls as it caught. No way to get to the back. The heat was too much. Couldn’t get to the screaming mule, and pull her from the stall. The inferno pushing him back. Taking Clara, he turned her for the door.

Driven out, both of them choking from the smoke, blinded by the sand. The flames shooting from the roof, long fingers reaching across to the house. The triangle clanging like mad from the porch post. Wrapping his arms around her, Sonny got her across the yard. A picket struck his back and knocked him down. Clara tugged him to his feet. Getting to the porch. The sand blasting so hard, they could barely see the barn, both getting inside the house. Praying it wouldn’t catch fire too.

“Kalteis does a brilliant job of planting us in this particular time and place . . . Even at its darkest, the story is lifted by a light, engaging touch. A sharp-witted, affecting noir, Dust Bowl-style.” — Kirkus Reviews

“Kalteis does a fine job of scene setting; the reader can practically smell the horehound candy at the general store and feel the grit in the air at Sonny's farm. Fans of historical crime fiction won't want to miss this one.” — Publishers Weekly

“Call Down the Thunder is profound and affecting, with just the right amount of comic leavening. As always, Kalteis shows himself to be a smart, skilled, entertaining, and — this is important — full-hearted writer.” — London Free Press

“As a historical novel, it’s a beauty . . . an excellent story that has lots of old fashioned gumption.” — Globe and Mail

“Immensely readable, tough but beguiling, Call Down the Thunder is a highly original novel: a pacy caper set in ugly times as the dust bowl, the depression, and the Klan gang up on a ragbag of dirt farmers, circus folk, and one indomitable woman, all hoping to scrape by till the rains come. Laugh-out-loud funny, lump-in-the-throat moving, and packed with surprises. I loved it.” — Catriona McPherson, multi-award-winning and national best-selling author of Strangers at the Gate