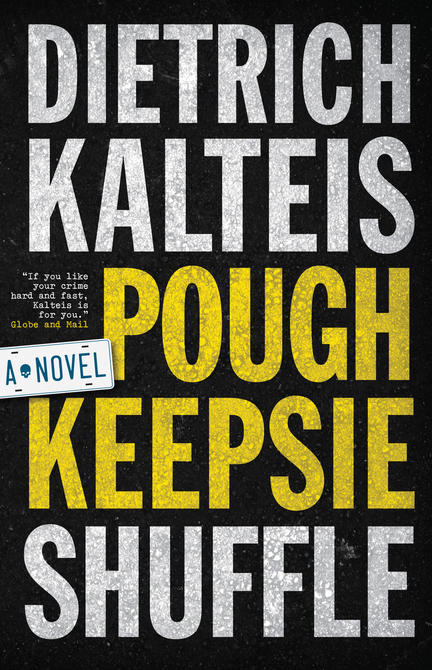 Jeff Nichols — a man strong of conviction but weak of character — is fresh out of the Don Jail, looking for work — any kind of work — and a way back into Ann Ryan’s good graces. She waited for his return from prison but is quickly running short on patience. An ex-inmate and friend gets Jeff a job at Ted Bracey’s used car lot, selling cars for commission only. But it’s not enough to keep him and Ann afloat in mid-80s Toronto, and the lure of easy money soon gets Jeff involved in smuggling guns from upstate New York. With that sweet Poughkeepsie cash, now he can keep his promises to Ann; he even buys them a house, but conceals the source of the money. As Jeff gets in deeper and deeper, everyone around him learns how many rules he’s willing to bend and just how far he’ll go to get on the fast track to riches. That he’s a guy who doesn’t let lessons from past mistakes get in the way of a good score.

Robbie Boyd stepped from the showroom doors, locking up Bracey’s AutoPark, catching the stockyard air coming from a block away. Feeling as rumpled as his suit, Robbie ran a hand through his thinning hair, looking to the street. Going to the Toronto Sun box at the curb, he dropped in a quarter and took a look at the front page. The Big Board doing a nosedive, the Jays winning one at home, and a couple of gangbangers gunned down in another Rexdale drive-by, the northwest of the city turning into a war zone. Flipping the page, Robbie gave the sunshine girl a seven and rolled up the paper.

Starting work at nine in the a.m., he’d sold a Monte Carlo to the first guy through the door, some hick who drove down from Stouffville, believed every word Robbie told him about the turbo model with the strato buckets and the previous owner who only put ten thousand true klicks on the odometer. The rest of day, Robbie drank too much Nescafé and passed cards and smiles to a bunch of tire kickers, pretty sure two would come back. Minus the pack, he’d clear nearly enough on the Monte Carlo to meet next month’s rent.

The Canuck buck was making a slow crawl from the toilet, and Ted Bracey, the guy who owned the AutoPark, was buying cars at auctions in upstate New York, detailing them and sending them north. Promised to raise the sliding scale if the buck crept higher. Ted had hired an ex-con named Vick DuMont, fresh out of the Don, and mentioned over lunch at the deli he was thinking about appointing Robbie to sales manager.

Long on promises, Ted Bracey had been paying Robbie the mini since the place opened. Robbie living on those promises and skinny commissions since the spring.

Looking in the direction of Gunns Loop, Robbie mulled jumping on the one-eyed streetcar, betting it would be packed armpit to armpit. Better to just walk the dozen blocks to home, stop for a cold one at Captain Jack’s, two bucks for a pint of Molson’s till seven. Twice in the last week, some afterwork babes had drifted in for the happy hour, and one of them, tall with thick-framed glasses, had been looking down the bar, glancing Robbie’s way. But Robbie would end up alone, nuking himself a Stouffer’s and thumbing the remote, nodding off to Johnny and Ed, same as always. But still, it was something, maybe it was hope.

The old Booker Jones number was rolling through his head again, been stuck there all day. The one about being down since he began to crawl. A grey Ford Econoline pulled to the curb just before he got to Old Weston, exhaust note like a cry for help, a Maltese cross dangling from its rearview. Twenty years since the heap rolled off some Detroit assembly line. One of the double doors on the side creaked open. A guy with a thick neck and dirty, blond hair squatted inside, a bent Rand McNally in his hand, giving the smile of the lost tourist. The guy behind the wheel turned his head and smiled, too.

“Where you boys want to be?” Robbie said, taking them for out-of-towners in for the Jays game, second in the series.

“Got messed around.” Flapping open the map book, the blond guy said, “Man, this city’s something, huh? Nothing runs the way you think.”

“Ought to try the Gardiner after a doubleheader, same time as the Ex. Want to talk about gridlock.” Cocking his head, Robbie tried making sense of the guy’s map, asking again where they wanted to be.

Climbing out, the driver came around the back, hands in his pockets, leaning in close like he wanted to see the map, nudging something into Robbie’s ribs, something sharp.

The blond guy saying, “Get in.”

“Hey, easy, come on . . . got hardly any cash on me.” Robbie dropped the book, looking around for help, the guy inside catching his wrist. The one behind him shoving, kicking the paper under the van.

The blond guy hit Robbie in the gut. The driver slammed the door, looking casual as he went around back and got behind the wheel, working the Ford-O-Matic, coaxing the eighty-five horses to life.

Rolling his tongue around his mouth, Robbie checked for teeth, struggling to say, “You got the wrong —”

Grunting about not calling him by name, Egg kept his eyes on the road, dealing with the traffic, crossing Dufferin.

Pulling out a roll of strapping tape, blond guy said nicknames meant shit and swung a leg across Robbie, zipping off about a foot and clapping it over his mouth. “Fact, I go by Bundy. Never gonna say it to nobody, I right, Robbie?” His knees pressed into Robbie’s shoulders.

“Good boy.” Patting Robbie down, Bundy took the wallet from the windbreaker pocket, checking his id, the new photo license, holding the likeness close to Robbie’s face. “Yeah, we got the right guy.”

Robbie thinking maybe he sold these guys a lemon one time. Maybe the one he was lying in. Robbie finding it hard to breathe just through his nose. Unable to talk through the tape, his lips stuck together, pressing at the tape with his tongue.

“Do me a favor, think you can do that, Robbie?” Bundy asked.

“Want you to pass on a message. Think you can do that?”

“Tell your boss, here’s what happens when you don’t pay what you owe. You with me?”

Pulling a pair of garden pruners from a pocket, Bundy flipped off the safety catch and snapped its parrot jaws, saying, “You tell that son of a bitch, he’s got till end of next week. Next finger’s gonna be his. You got it?”

The scream into the tape came out like a long moan, Robbie trying to buck Bundy off.

Landing a slap, Bundy told him to hold the fuck still. “These things are fuckin’ sharp.”

Robbie couldn’t breathe, panicking, trying to jerk his hand away from the blades.

Locking hold of the wrist, Bundy said, “How about a tune there, Egg?”

Lifting a boom box off the passenger floor, Egg faced it to the back and wedged it between the buckets. Egg twisted the volume knob and pressed play. “Addicted to Love” pumped through the speakers, Egg driving on, tapping his fat fingers on the wheel.

Robbie bucked and writhed, Bundy forcing his finger between the jaws.

“There we go, nothing to it.” Bundy rode the convulsing Robbie, the man’s eyes bugging. Holding up the digit, Bundy showed it to him, saying except for the fingernail, it looked like one of the sausage links he’d downed for breakfast.

Fighting the spin down the black hole, Robbie kept from passing out. Egg turned right past the old Joy Oil station, checked his mirrors, stopped on the side street and switched off the boom box. Reaching a tub of Wet-Naps, he passed them back.

Propping Robbie up, Bundy pulled a few tissues, clapping the man on the back like he’d been a good sport, warning him about going to the cops. He took a couple more tissues and wrapped the pinkie, handing it to Robbie. “There’s a clinic a couple doors up. Hurry, maybe they can, you know, reattach it.” Bundy pointed past the station. Yanking the handle, he pushed the side door open with a foot, zipping the tape from Robbie’s mouth, helping him out, Bundy saying, “Watch your step there, and Robbie . . .”

Robbie turned, clamping his jaws, the pain sharp and shooting through him.

Nodding, tears starting. Clutching the injured hand with the other, Robbie didn’t take a step until the Econoline turned on St. Clair and pulled away. He stumbled past the station, dripping blood down his sleeve. In shock. The pain becoming more intense.

It was a vet clinic called Paws ’N Claws. Robbie stood there rapping with his elbow, then he kicked at the wood door a couple of times, yelling, looking in the window for anybody moving around inside. He couldn’t get himself to look down at the hand and the wrapped finger.

“The dialogue recalls Elmore Leonard . . . The antics are good fun. Best read for the pleasures to be found around the edges.” — Booklist Online

“For the perfect crime caper cocktail you need a good(ish) guy in over his head, a bevy of bad guys and scumbags, a get-rich-quick scheme doomed to failure and a dash of dark humor. Poughkeepsie Shuffle has all these ingredients in spades.” — Simon Wood, USA Today bestselling author of Saving Grace

“Nobody portrays lowlifes gunning for the high life as credibly as Dietrich Kalteis. Poughkeepsie Shuffle delivers a s***load of excitement, and a glimmer of light, in one badass world.” — John Farrow, author of The Storm Murders Trilogy

“Poughkeepsie Shuffle weaves a violent tale about banged up people with hearts full of rust. Crossing the border between bleak and bleaker, Kalteis effortlessly shifts gears from broken dreams to petty schemes with a rhythmic voice that’s all his own. If you read one book about gun smuggling, used car sales and hair restoration this year — make it this one.” — S.W. Lauden, author of the Greg Salem punk rock P.I. series