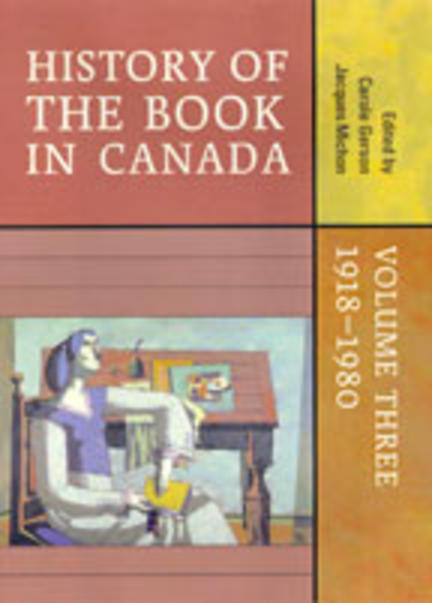 The History of the Book in Canada is one of this country's great scholarly achievements, with three volumes spanning topics from Aboriginal communication systems established prior to European contact to the arrival of multinational publishing companies. Each volume observes developments in the realms of writing, publishing, dissemination, and reading, illustrating the process of a fledgling nation coming into its own. The third and final volume follows book history and print culture from the end of the First World War to 1980, discussing the influences on them of the twentieth century, including the country's growing demographic complexity and the rise of multiculturalism.

Crucial to creating a sense of identity during this period was the Royal Commission on National Development in the Arts, Letters and Sciences, whose report of 1951 led to the establishment of influential cultural institutions such as the Canada Council for the Arts and the National Library of Canada. Other key developments included the initiation and growth of library systems, the expansion of film, radio, and television, the burgeoning of children's literature, enhanced opportunities for writers, the Quiet Revolution in Quebec, and the rise of Canadian studies and Canadian literature as respected fields for teaching and research. In English Canada, mainstream book publishing flourished during the 1920s, suffered severely during the Depression, went through a period of renewal and advance after the Second World War, but became imperilled by the 1970s. Small literary presses and allophone publishers, in turn, grew increasingly significant during the 1960s, a decade in which Quebec's new cultural policies began to foster ongoing support for francophone book culture.

In addition to telling the stories of Canada's recent book history, this volume pays due attention to multifarious developments in print culture, including book prizes, sports writing, pulp magazines, the alternative press, Coles Notes, the international success of Harlequin, and the unprecedented influence of Les insolences du Frère Untel, the famous cry for education reform in 1960s Quebec. Volume three of the History of the Book in Canada marks the successful completion of an extraordinary project that documents the country's achievements for generations of scholars and readers to come.

Born in Montreal, Carole Gerson is a professor in the English Department at Simon Fraser University. Her research on Canadian literary and publishing history and on early Canadian women writers has resulted in many publications, including two books on Pauline Johnson. She was a member of the editorial team for the major three-volume project History of the Book in Canada, for which she co-edited volume 3, covering the period 1918–1980.

Jacques Michon is a professor in the Département des lettres et communications and a Canada Research Chair in Book and Publishing History at l’Université de Sherbrooke.

Other titles by Carole Gerson

Paddling Her Own Canoe

The Times and Texts of E. Pauline Johnson (Tekahionwake)

Canadian Poetry from the Beginnings Through the First World War

The Prose of Life