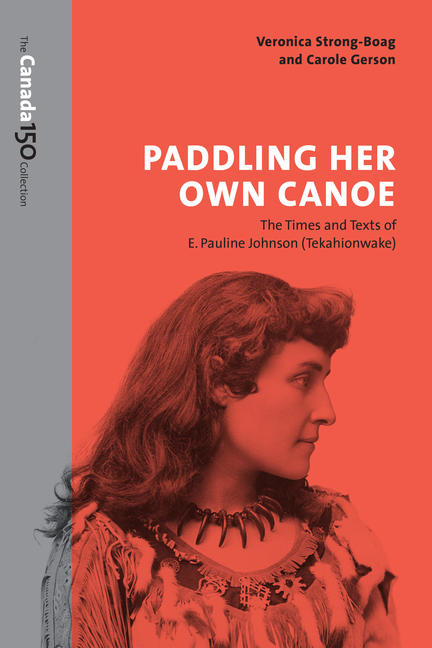 Frequently dismissed as a 'nature poet' and an 'Indian Princess' E. Pauline Johnson (1861-1913) was not only an accomplished thinker and writer but a contentious and passionate personality who 'talked back' to Euro-Canadian culture. Paddling Her Own Canoe is the only major scholarly study that examines Johnson's diverse roles as a First Nations champion, New Woman, serious writer and performer, and Canadian nationalist.

Pauline Johnson was an extraordinary woman who crossed the racial and gendered lines of her time, and thereby confounded Canadian society. This study reclaims both her writings and her larger significance.

Veronica Strong-Boag is a professor of women’s and gender studies and of educational studies at the University of British Columbia. She is a member of the Royal Society of Canada and a past president of the Canadian Historical Association. She has written widely on the history of Canadian women and children—including studies of the 1920s and 30s, the experience of post—WW II suburbia, Nellie L. McClung, E. Pauline Johnson, childhood disabilities, and modern neo-conservatism’s attack on women and children—and has won the John A. Macdonald Prize in Canadian History, the 2012 Canada Prize in the Social Sciences awarded by the Canadian Federation for the Humanities and Social Sciences and, with Carole Gerson, the Raymond Klibansky Prize in the Humanities. In 2012 Strong-Boag was awarded the Tyrrell Medal from the Royal Society of Canada for outstanding work in Canadian history. She is the author of Fostering Nation: Canada Confronts Its History of Childhood Disadvantage (WLU Press, 2010).

Born in Montreal, Carole Gerson is a professor in the English Department at Simon Fraser University. Her research on Canadian literary and publishing history and on early Canadian women writers has resulted in many publications, including two books on Pauline Johnson. She was a member of the editorial team for the major three-volume project History of the Book in Canada, for which she co-edited volume 3, covering the period 1918–1980.

Other titles by Veronica Strong-Boag

The Times and Life of Mary Ellen Spear Smith

The Life and Times of Laura Marshall Jamieson

The Lives and Times of Ishbel Marjoribanks Gordon and John Campbell Gordon, the Aberdeens

English Canada Encounters Adoption from the 19th Century to the 1990s

edited by Veronica Strong-Boag & The Estate of Michelle Lynn Rosa

Other titles by Carole Gerson

Canadian Poetry from the Beginnings Through the First World War

History of the Book in Canada

The Prose of Life