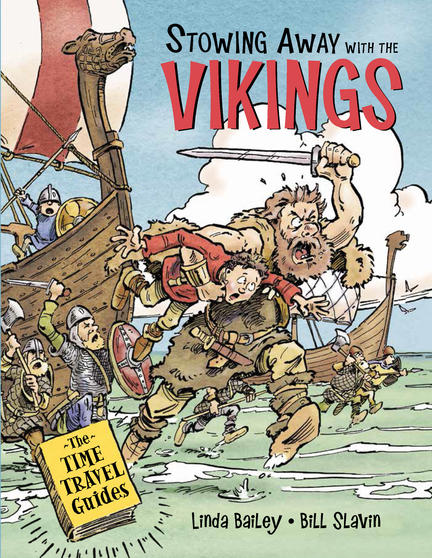 Twins Josh and Emma Binkerton swore they'd never return to the Good Times Travel Agency. Only now, a terrible storm has driven them and their little sister, Libby, right through its doors. Worse, Libby's opened another of Julian T. Pettigrew's guidebooks, and the Binkertons find themselves hurtling back in time --- to the Viking Age. All seems fine, at first, as the children are welcomed by the locals. But they quickly realize that Viking life is not for the faint of heart: it involves beds made of earth, monotonous farm work and death-defying sports. And when Josh and Libby inadvertently stow away on a Viking ship headed for a raid, it suddenly turns perilous! Can the Binkertons finish the guidebook and travel back to the present before it's too late?

Part of the award-winning Time Travel Guides series from the talented Linda Bailey and Bill Slavin, this thrilling graphic novel combines fact and fiction to make learning about the past fun. It employs a fast-paced narrative that's quirky and funny, and colorful, detailed illustrations to create an engaging and accessible overview of the Viking Age. Key facts, vetted by experts, are cleverly embedded in the story through the guidebook. This title makes an excellent resource for social studies and history lessons on the period, covering politics and government, travel and trade, education, celebrations and more. The back of the book contains a short history of the Vikings, including a map, as well as a bibliography, further resources and an index.

Sure to hook both reluctant and avid readers ...