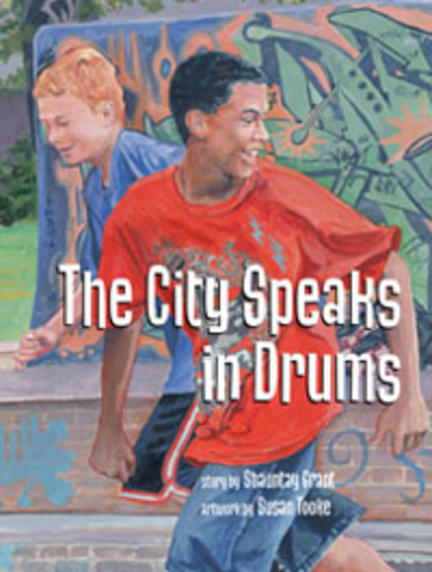 Two boys from North End Halifax explore their neighbourhood and the city beyond, finding music everywhere. At the skate park, by the Public Gardens, down Spring Garden Road, and on the boardwalk, drums and saxophones and dancers and basketballs create the jumbled, joyful, pulsing rhythm of Halifax. Shauntay Grant's playful spoken word-style poem and Susan Tooke's vivid illustrations create a wildly energetic and appealing journey through the big, bright city.

The City Speaks in Drums

Two boys from North End Halifax travel through their neighbourhood into the city that extends beyond. The sights and sounds seem to speak to them in rhythm. They see children playing basketball, a mirthful water-pistol chase, a family barbecue, musicians hanging out, the spoon man tapping rhythms for spare change, the poet “spittin’ verses from the highlife café.” They end at the harbour where they are “poppin’ and lockin’ hip hoppin’” on the waterfront and watching dancers who represent dancers a variety of ethnicities.

Everything about this book speaks of vitality. Whether it is the electrifying illustrations, the exuberance of the rhythm embodied in the verse, the pleasure of the children seeing their surroundings with the unique awareness of the young, the ingenuity of the effervescent people they meet—all celebrate the joie de vivre of a Canadian city and its culture. Creativity and gladness burst from every page. Truly the drum of this city “is a heart and a soul and a mind all of its own.”

The free form verse is upbeat, emanating musical energy and joy. The lilt of the dialect would contribute to a dramatic read-a-loud for the right performer or storyteller. The illustrations are radiant, using real models from the community who are each acknowledged by the artist. Every double-page spread is full of expression and detail, capturing in vivid colour the vigour of the city with its beautiful harbour, familiar landmarks and irrepressible inhabitants.

This is the second collaboration between poet laureate, broadcaster and spoken-word artist Shauntay Grant and illustrator Susan Tooke. Their first, Up Home, won them many accolades and several awards. The City Speaks in Drums is a beautiful addition to any collection. The subject and artwork speak to the free spirit and inner joy in each of us, no matter what our age.

My Fade Is Fresh