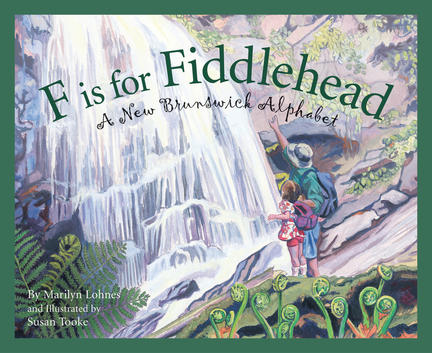 Do you know which Canadian province is the only officially bilingual one? Or what type of seaweed is actually sold and eaten as a snack food? The answers to these questions, along with many facts, traditions, and much history, can be found in F is for Fiddlehead: A New Brunswick Alphabet. Points of pride include the world's longest covered bridge (located in Hartland), Kouchibouguac National Park, and the weeklong Chocolate Festival of St. Stephen's Ganong Bros.' chocolate factory. A tastier G could never be found where candies and chocolate are sold by the pound. All sort of treats you are certain to see if you, by chance, visit Ganong factory. From the 'A' of Acadian culture to the 'Z' of zinc production, readers young and old will enjoy this scenic armchair journey that showcases the riches of New Brunswick.

Marilyn Lohnes loves watching children learn and discover with every story they hear. She has worked for many years as a librarian, has read thousands of stories to children, and helped to bring authors to New Brunswick through the Canadian Children’s Book Week. In her spare time she likes to explore the province with husband Richard. They pack a picnic lunch and kayak, hike or simply drive to discover wonderful new places.