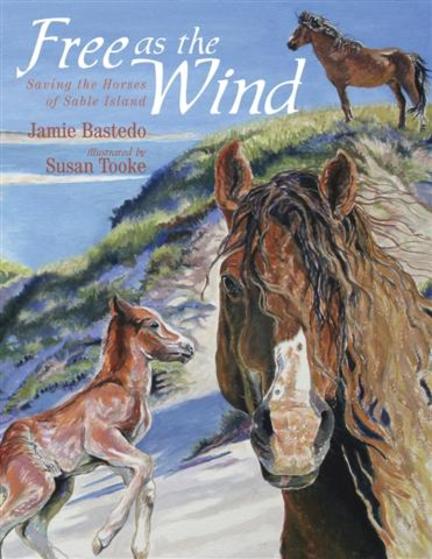 Children can make a difference. The horses of Sable Island-they are a romantic and enduring symbol of the will to survive in an unforgiving environment. Hundreds of these wild horses live on the windy beaches and dunes of this remote island known as the graveyard of the Atlantic off the shores of Nova Scotia. Free as the Wind is Jamie Bastedo's re-creation of one of the most fascinating episodes in the history of these wild creatures: the moment in the early 1960s when it was decided the horses would be removed from the island and auctioned off, many of them slaughtered for dog food. School children across the country wrote Canada's then Prime Minister, John Diefenbaker, pleading with him to restore the horses to the island, to save them from certain death. This fictional account of that pivotal moment in Canada's history follows young Lucas Beauregard, son of the retiring superintendent of Sable Island, as he befriends and then plots to save Gem, one of the horses of Sable Island. The horses of Sable Island are a national treasure, not only because their history dates back as early as the settlement of Canada, but also because their continued survival showed the world that children can make a difference. Susan Tooke's sparkling paintings capture the spare but magnificent terrain of Sable Island in a way that will captivate readers of all ages.

Jamie Bastedo, former CBC North host and author of Shield Country: The Life and Times of the Oldest Piece of the Planet, Reaching North: A Celebration of the Subarctic and Blue Lake and Rocky Shores, reflects on the charm and mystery of the Canadian Shield. He writes to inform and to inspire, telling a "story of place." He lives in Yellowknife, NWT and operates a touring company that takes tourists on tours of the North and also runs an environmental consulting company.

"Yellowknife author Jamie Bastedo has crafted a straightforward story that is sure to inspire today's schoolchildren. Halifax artist Susan Tooke, who won the Mayor's Award for her illustrations in Full Moon Rising, displays her considerable talent with paintings that capture the mystical spirit of Sable Island and its ponies."
-- The Chronicle Herald (Halifax)

"Jamie Bastedo and Susan Tooke, author and illustrator respectively, do a fine job here of recreating characters and landscape, and a moment in Canadian history."
-- The Globe And Mail

"Jamie Bastedo bases the text of his first picture book on a deftly woven mix of narrative and dialogue. The text is punctuated by onomatopeic words in italics that create the effect of a soundtrack: "I take pictures. Click" and "Whump-whump-whump. The big fan in the attic keeps me awake." The voice, reactions, and attitudes of Lucas reveal an authentic character, and the portrayal of his nurturing, supportive family likewise rings true.

"Nova Scotia artist Susan Tooke's 16 double-page illustrations are striking. The fresh openness in her sand and seascapes contrasts effectively with the crowded confines of her ship and city illustrations. . .

"Free as the Wind's cover will attract horse lovers, though, while its East Coast setting will appeal to Maritimers and its resolution will please everyone who loves a happy ending. As well, parents, teachers, and librarians will appreciate the book for its historical relevance and for the lesson it teaches: that lobbying can result in effective change."
-- Quill & Quire,

"Susan Tooke's illustrations are the strength of this book as they add richness and vibrancy to the story. Using the combination of acrylic paints on watercolour paper, she extends the simple text by using flowing lines and rich colour combinations to evoke the emotions of joy and sadness that the story describes. Some images display the horses' wild and powerful spirit while others vividly capture the life of the Canadian people in the 1960s. Lucas comes alive as Tooke illustrates him with large emotive eyes and strong, realistic actions. Truly, the illustrations give life to this text and help to bring history into the present for the reader."
-- CM Magazine

Free as the Wind: Saving the Horses of Sable Island

In the 1960s, Canadian school children wrote to the Prime Minister asking him to save the horses of Sable Island from being slaughtered. This fictional account of that pivotal moment is an inspirational tale for school children everywhere.

Other titles by Jamie Bastedo

Protectors of the Planet

Environmental Trailblazers from 7 to 97

A Naturalist's Journey into the World of Winter

A Celebration of the Subarctic

The Life and Times of the Oldest Piece of the Planet