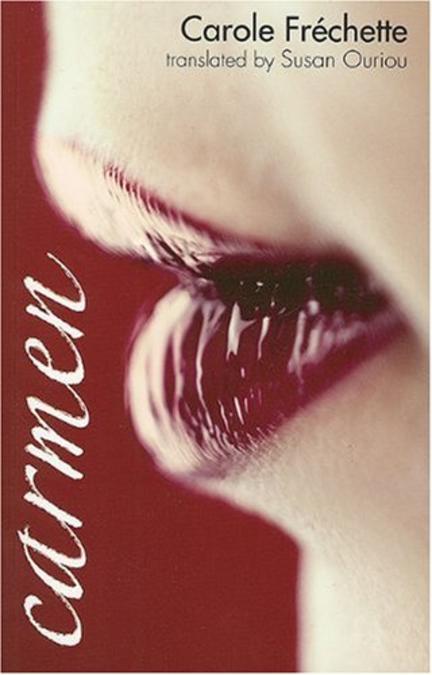 On a gray Valentine's Day, fifteen year-old Carmen's world is turned upside down. She must give a presentation in class, and her fear of public speaking is making her sick. To make matters worse, Carmen is convinced today is the day she'll die of shame. If only she hadn't put that note in Simon Krasinski's locker asking him to the school dance!

Instead of going to school, Carmen runs the other way into an adventure she could never have imagined. When she meets a local rock star at a laundromat, Carmen is propelled into a journey of self-discovery where maybe, just maybe, she'll find the elusive love she so desires.

Carole Fréchette has been a force in Québec theatre for more than twenty-five years. Her plays, translated in several languages, are performed all over the world. She won the 1995 Governor General’s Award for her play Les Quatre morts de Marie (The Four Lives of Marie) and the 1998 Chalmers Award for the same play translated into English. She then received Governor General’s Literary Award nominations for La Peau d’Élisa (Elisa’s Skin) in 1998, for Les Sept jours de Simon Labrosse (Seven Days in the Life of Simon Labrosse) in 1999, and for Jean et Béatrice (John and Beatrice) in 2002. Her play Le Collier d’Hélène (Helen’s Necklace) recently earned her the Sony Labou Tansi Award in France. In 2002, the French association SACD (Société des auteurs et compositeurs dramatiques) awarded her, in Avignon, the Prix de la Francophonie to underline her success in the French-speaking world; the same year, she received in Toronto the Siminovitch Prize, Canada’s most prestigious theatre award. Three English translations of her plays by John Murrell, were published under the title Three Plays by Playwrights Canada Press in Toronto: The Four Lives of Marie, Seven Days in the Life of Simon Labrosse and Élisa’s Skin. She has also translated Colleen Wagner’s The Monument into French.

"A powerful, poignant novel that should resonate with teen readers."
— Quill & Quire

"The novel is hypnotizing; from the first line to the last page."
— Calgary Herald

"..[a quirky, disarming novel . . . a journey that Frï¿½chette charts with an all-seeing eye, a pitch-perfect ear and a voice that will resonate with readers."
— The Globe and Mail

"Carmen is a mature, wistful narrative that captures the nuances of an adolescent girl's angst about love and identity. Highly Recommended."
— CM Magazine

"This slim volume is full of angst and self-discovery. Fans of Laurie Lalse Anderson's Speak will relate to this layered character."
— School Library Journal

"Frï¿½chette has crafted an entertaining coming-of-age story that is both funny and poignant."
— The United Church Observer

Other titles by Carole Fréchette

Helen's Necklace and John and Beatrice

In the Key of Do