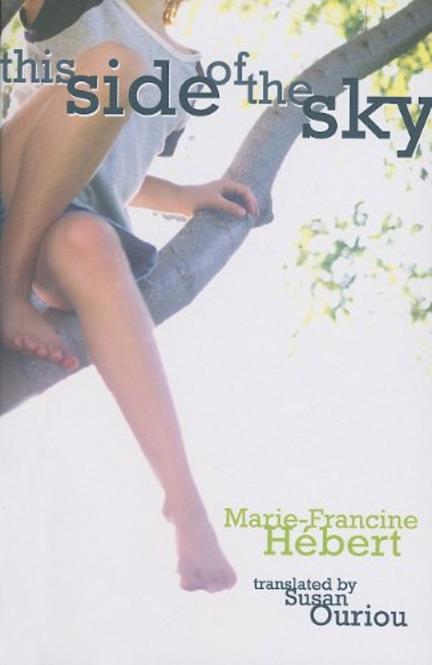 Mona and Bird witness something terrible from their treetop perches and suddenly life changes forever.

On this side of the sky, Mona and her kid sister, Bird, hide in the woods each day because it's far better than being home. But then there's the other side, the side Bird dreams of while she sits in the tall trees she climbs to get away from a life devoid of love. Bird may be eight, but her mind's only five, and Mona has to babysit her most of the time. All their father can do when he gets home is lie on the couch and watch TV, and with another baby on the way, it seems like Mona's mother is always too occupied with her own problems and misery to pay any attention to her.

They don't have many friends, but Mona and Bird have always had each other and the hideout of the hidden lake to run to when they needed to escape from mothers and fathers and teachers and bullies and the friends they want and the friends who need their help. But then Mona and Bird witness something terrible in the woods, and suddenly life changes forever for Mona and the others trapped on this side of the sky.

Written from Mona's perspective, this translation of a Governor General's Literary Award-nominee and winner of the PRIX DU LIVRE M. CHRISTIE explores themes of racism, sexual abuse, low self-esteem and the pain all these inflict on those who deserve it least.

Due to more mature content, this book is recommended for children 14 and up.

Marie-Francine Hébert is an award-winning writer for young people of all ages. She has nearly twenty books to her credit and has seen her work translated into numerous languages, among them Chinese, Arabic, Korean, Polish, English and German; Marie-Francine’s books and work for television and film have garnered many prizes, among them the Governor General’s Award, the Mr. Christie’s Book Award and the Munich Library’s White Ravens Selection.

"Translator Susan Ouriou achieves a colloquial English that suits the setting and captures Mona's poetic flair. For instance, we read: "The light's shining louder than usual in all four houses, a blaring light that can be heard from a long way away." Author Marie-Francine Hï¿½bert makes use of high-level narrative skills to show the creative and moral potential of people in humble circumstances. I feel elevated for having read it and wish my French was good enough to appreciate the original novel."
Highly Recommended
— CM Magazine

"Skilled in the art of illusion, Hï¿½bert creates a strong feeling of fragmentation in this novel, while maintaining a tight, unified structure. The translation, by Calgary-based writer Susan Ouriou, is sensitive and subtle, telling the story in natural-sounding, colloquial English without sacrificing its otherworldly sensibility."
— Quill and Quire

Other titles by Marie-Francine Hebert

A Ghost in My Mirror

A Monster in My Cereal

The Amazing Adventure of LittleFish