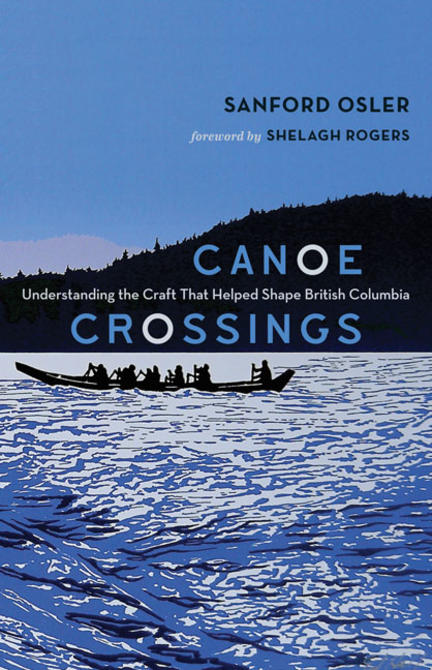 “A comprehensive and well-informed review of canoeing and kayaking in British Columbia.” —BC Studies

Often called one of the Seven Wonders of Canada, the canoe has played a particularly important role in British Columbia. This seemingly simple watercraft allowed coastal First Nations to hunt on the open ocean and early explorers to travel the province’s many waterways. Always at the crossroads of canoe culture, BC today is home to innovative artists and designers who have rediscovered ancient canoe-building techniques, as well as community leaders who see the canoe’s potential to bring people together in exciting, inspiring ways.

The story of Canoe Crossings begins some fifteen thousand years ago, when, as compelling new evidence suggests, the first humans to reach the Americas did so by canoe down the West Coast. It continues through the centuries, chronicling the evolution of the canoe and its impact on the various people who used it to explore, hunt, trade, fight, race, create, and even heal. The book contains dozens of stories of colourful, passionate people who have contributed to the province’s canoe culture, including a teenager who lived ninety feet up in a tree house while designing and building the world’s longest kayak; a group of high school students who practised on a tiny lake and went on to win several World Dragon Boat Championships; and at-risk Aboriginal youth who reconnected with their traditional culture through annual “big canoe” trips.

Canoe Crossings will appeal to anyone who has ever sought adventure, found solace, or seen beauty in a canoe or wondered about the origins of its design and use in British Columbia and beyond.

Sanford Osler was introduced to canoes as a youngster at summer camp, an event that sparked a lifelong interest in the role of the canoe in our history and modern-day lives. This fascination has led him to collect research and information about the subject over numerous years, and he has given talks about the canoe to audiences across BC. Osler has owned a red sixteen-foot wooden canoe for over forty years and has taken it on trips throughout Canada including to the Broken Islands, Bowron Lakes, and Gulf Islands. Osler holds an MA from the University of British Columbia and is currently vice-chair of the North Vancouver Museum and Archives Commission and a trustee of the North Vancouver District Public Library

"Canoe Crossings is an authentic and engaging contribution to canoelit and "must" reading for anyone interested in pondering Canada’s canoe past, present, and future from sea to sea to sea." —James Raffan, Director of Development, Canadian Canoe Museum; Author, Bark, Skin and Cedar: Exploring the Canoe in Canadian Experience

"Canoe Crossings is not just about the canoe, but about the many people throughout history to the modern day whose existence and livelihood depend on this noble craft. Sanford Osler brings their passion for paddling to life. If you have ever held a paddle in your hand, you should read this book."

“Sanford Osler injects the canoe back into BC history, while explaining how this simple water craft still plays a crucial role in the life of the province.”

"Nobody has done a better job of connecting the 'canoe dots' on the Northwest Coast and BC's interior waterways than Sanford Osler. His lifelong interest in canoe travel, canoe design, and canoe personalities enthuses Canoe Crossings with both wisdom and generosity of spirit. His book is a 'j-stroke' in prose."

"Brimming with Canada's history, Canoe Crossings is a well written and well researched 'must read' for anyone who enjoys paddling the waters of British Columbia. From the original birchbark canoe to today's dragon boats and outriggers, the canoe is a symbol of our cultural connections, teamwork, and friendship, and our passion for nature."

"Canoe Crossings provides a fascinating lens for us to appreciate our collective history, the story of this ancient boat, and the precious rivers, lakes and oceans we will continue to paddle." —Janet Nicol, British Columbia History

"Sanford Osler's Canoe Crossings is a fascinating discovery from past to present of one of the most recognized sinews threading Canadians, their history and development—the canoe, in all its forms. Blending brilliant storytelling with colorful description, [Canoe Crossings] provides every reader with the sense of pride and tradition in the role these boats have played and continue to play in our provincial and Canadian mosaic."

"Sanford Osler has used his wide experience with many forms of paddle-craft to write a comprehensive and well-informed review of canoeing and kayaking in British Columbia." —Alan Hoover, BC Studies

“The canoe is a threshold vessel—a skin, a fabric, and some bark between water and sky. Floating is some kind of miracle, some kind of dream. All canoeists are dreamers to a degree. As you will see in Canoe Crossings, the canoe has always brought diverse groups of people together, both for joy and for common purpose, and it always will."

—from the foreword by Shelagh Rogers

"Canoe Crossings will find a place in the heart of people involved in the paddling community in BC." —Coast & Kayak Magazine

"An important and substantial contribution to canoe literature and to the significance of this watercraft in BC. The blend of history, present-day, and personal accounts is sensitively and fascinatingly presented. A highly informative and captivating read."