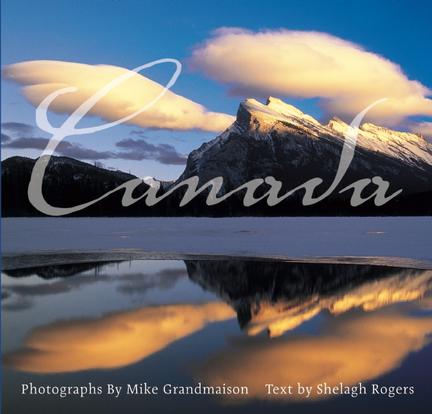 Canada is rich in history and culture, but it's the country's resplendent natural beauty that makes it unique in the world. Within its borders lies some of the most spectacular and photogenic vistas: from the desolate, sweeping lowlands of the arctic, to the dewy rainforests of the Pacific Northwest, to the sloping, worn stone outcroppings of the Canadian Shield, a blanket of unparalleled beauty unfolds.
In this breathtaking coast-to-coast photographic panorama of Canada, Mike Grandmaison presents a portrait of a country whose seasons are variable and changing, reflecting the many moods of nature in all its glory. Broadcaster Shelagh Rogers complements Grandmaison's photography with an introduction to the book that both embraces the country and describes her feelings for a place that defies a simple description.

Author Mike Grandmaison is an award-winning Canadian photographer specializing in Canadian nature and landscapes. Over twenty years with the Canadian Forest Service has instilled in him a great appreciation and respect for nature and the outdoors. His work has been widely published in leading magazines and books and has been used by some of North America's top corporations and organizations including Canada Post, Sony Music, Canadian Tire Corporation, Coca Cola, Ford, National Geographic, Canadian Geographic, Loblaws, the Government of Canada and many others. Mike travels from coast to coast to coast in search of evocative images that capture the spirit and grand diversity of Canada. For his talent and skill he has been awarded a Northern Lights 2007 award for Excellence in Travel Journalism. Professional associations include member of the Canadian Association of Photographers and Illustrators in Communications (CAPIC), Professional Photographers of Canada (PPOC), Society of Graphic Designers of Canada (GDC) as well as a lifetime member and past president of the Canadian Association for Photographic Arts (CAPA). More of Mike’s work can be viewed on his website at www.grandmaison.mb.ca

Other titles by Mike Grandmaison

On the Road with Mike Grandmaison

Mike Grandmaison's Prairie and Beyond