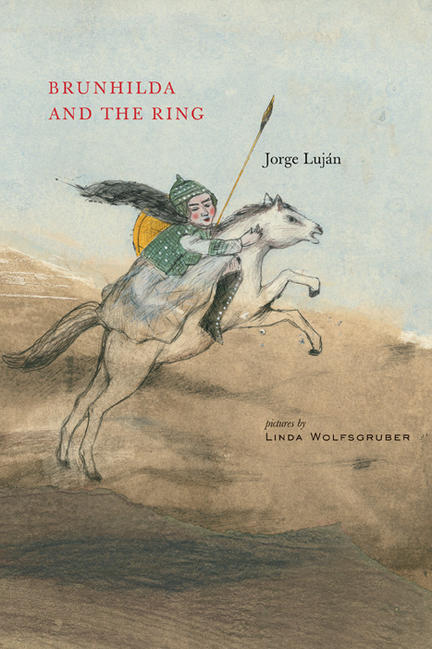 In this brilliant retelling of the Ring Cycle, noted Argentine/ Mexican poet Jorge Lujan gives us the true hero of these ancient and powerful myths -- Brunhilda. Through her love, passion and unwavering loyalty she redeems Siegfried. The gods and her whole world come crashing down around her, but by her sacrifice she manages to remain a stirring and admirable figure amongst the vain, the greedy, the venal and even the evil forces that surround her. She does not accept the stifling conventional view of marriage as espoused by Fricka, Wotan's wife. Neither does she succumb to brute power as exemplified by her father. Nor does she forget her love and betray her vows as does Siegfried, who is so inconstant and ultimately foolish.

Lavishly and exquisitely illustrated by master artist Linda Wolfsgruber, and told in free verse, this book gives us a new way to look at the ancient story.

Jorge Luján is an author, poet and musician who has published forty-four books and recorded eight CDs. With many of the world’s greatest illustrators, he has created an outstanding body of work — translated into 15 languages — including Stephen and the Beetle, illustrated by Chiara Carrer; Doggy Slippers and Numeralia, illustrated by Isol; Colors! ¡Colores!, illustrated by Piet Grobler; Moví la mano / I Moved My Hand, illustrated by Mandana Sadat; and Brunhilda and the Ring, illustrated by Linda Wolfsgruber. Jorge has just published his first novel, Salando el río con una cucharita (Salting the River with a Teaspoon). Among other distinctions, he has won the Premio de Poesía para Niños de ALIJA (IBBY Argentina) and has been nominated four times for the Astrid Lindgren Memorial Award. See more of his work on Facebook (Jorge Luján. Poesía y Música), on the Jorge Luján YouTube channel, on his Bandcamp page, Soundcloud and jorgelujan.net.

Linda Wolfsgruber is a highly acclaimed artist in Austria and around the world. She has exhibited her work throughout Europe as well as in the United States and Japan and has won many awards, including the Austrian Children's and Juvenile Book Award for Illustration (four times) and the Golden Apple of the Biennial of Illustration Bratislava. She has been nominated for the prestigious Hans Christian Andersen Award. Her very original illustrations appear in Inanna: From the Myths of Ancient Sumer, Stories from the Life of Jesus and Brunhilda and the Ring.

Sparsely detailed images provide an eleganceto the retelling [of the Ring].

Sure to delight to people of all ages.

The details of the story are sophisticated, and both text and illustrations will delight adults [and children alike].

“Whoever forges a ring from the gold of the Rhine shall have the world at his feet. Valalaia, valee!” In graceful flight the Rhinemaidens brush against Alberich as goosebumps cover his cold toad-like skin. The dwarf pursues them, touching them as they swim, but it's soon clear that they're provoking and rebuffing him without yielding a thing.

“To get the treasure,” Woglinde warns, “you must renounce love forever, and who has ever known a creature that could live without love's delight?”

Other titles by Jorge Luján

Stephen and the Beetle

Other titles by Linda Wolfsgruber

The Camel in the Sun

Stories from the Life of Jesus mini /hc

Stories from the Life of Jesus

The Doorman of Windsor Station

A Critical Study of Ten Latin American Writers of Canada