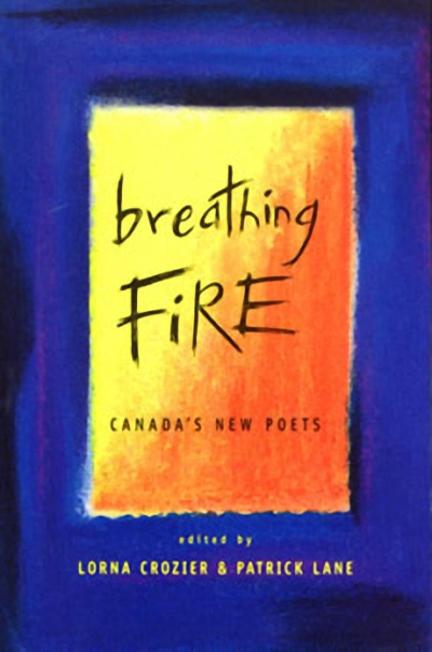 A new generation of Canadian poets has come of age!

In this volume, award-winning poets Lorna Crozier and Patrick Lane present the work of 31 of the country's best young poets, including Michael Redhill, Karen Solie, Karen Connelly, Gregory Scofield, and Stephanie Bolster. "These are the writers who were born in the mid-1960s to 1970s," Crozier writes. "They are a large, precocious, ardent group of skilled and passionate writers, and they have a faith in the power of poetry to rekindle, redeem and renew. Without a doubt their poems are breathing fire."

Born in the sixties and seventies, these poets are the best of the new and the best of the young. They are the voices of the nineties, a decade that will bridge the millennium. Not since the early seventies when Al Purdy put together his Storm Warning anthologies has there been as audacious and provocative a collection of new poetry. The poets here are in your face and in your heart, celebrating poetry in all its exhilirating variations. What is remarkable are not only the new contexts and new stories, but how respectfully and joyfully the new writers have returned to the poets who wrote before them.

We have been waiting for this new generation. Their eloquent poetry speaks to our times, to who we have been and who we are about to be.

CIGARETTES (I)
by Michael Crummey

The day my grandfather died he ate
a meal of salt beef and cabbage in his
sick bed, his appetite returning for
the first time in weeks, the skin
hanging from the bones of his face like an oversized suit.

My father had gone in to see him
earlier that morning, fifteen years old then
and thinking the old man was recovering;
they spoke for a few minutes about the cold
and about going out in the spring,
and then my grandfather asked his son for a cigarette.

Summers, after the caplin had rolled,
the cod moved into water too deep for traps
and the two of them would spend the days jigging,
standing at the gunnel with a line down
two fathoms, repeating the rhythmic full-arm jig
as if they were unsuccessfully trying to
start an engine;

mid-afternoon they'd stop to eat,
stoking the galley's firebox to stew cod's heads
and boil tea, then my grandfather would sit aft
with a pipe, pulling his yellow oilskin jacket
over his head until he was finished.
He'd known for years that my father was smoking
on the sly though he'd never acknowledged it,
hid beneath a coat to give his son
a chance to sneak a cigarette
before they got back to work.

The air in the sick room was so cold
their breath hung in clouds between them.
My grandfather was about to die of cancer or TB
and his son sat beside the bed,
his pockets for once empty of Bugle or Target tobacco,
telling his father he had no cigarette to give him
which happened to be the truth, and felt like
a lie to them both.

THE LAST SOCKEYE
by Tim Bowling

Always I think of the last sockeye,
the one in late October; blind,
blood-red, half-rotted, so far from the creeks of spawning,
it just lay beside our net
in the silt-grey water -- confused
or resting, we couldn't say --
then with one weak push
gilled itself
so we had to roll it in.

The last of its kind for the season;
most had died, or spawned and died,
at least a month before;
I could not gaff it.
We stood in the chill north wind, bemused,
as though we'd been given an early Christmas gift,
red-wrapped and taken
from below the mountains' undecorated evergreens;
we stared at the rotted eyes
and scales like bloodied coin,
a glove of chain-mail
after a Crusades slaughter
the living hand still inside.

and always the gap between us
as wide as the gap
between the sockeye and its goal;
three separate instincts
with nothing to win
three separate species:
I don't remember what we said
or even if we spoke at all
but the salmon, at least,
knew what it wanted,
so I gave it back to the river,
blind, rotted, and doomed,
I gave it back

In the green half-light of three a.m.
my brother wakes me, pulls my slumbering body
into the yard to see the rabbits being born.

They emerge all wet and pink as finger
tips nestled into sawdust beneath
their mother -- one, two, then three

naked bodies in the sudden beam
of my brother's flashlight. We hold
our breath as her small eyes take us

in, red in the light, full of fire,
and there is a moment, heavy as
the moon, when we know it is too late

to retreat, unsee, resume our innocent
beds. The mother's eyes angry
as she hunches up and turns away,

leaves us watching, the wind
cold through our nightclothes, as she swallows
up her children -- one, two, then three

wriggling bodies disappear into her tiny
sharp-toothed mouth, the flashlight
dropping to the grass at our feet.