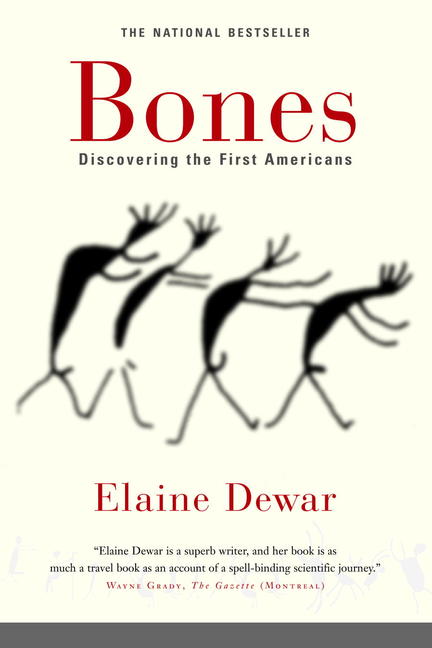 Scientists not so long ago unanimously believed that people first walked to the New World from northeast Asia across the Bering land bridge at the end of the Ice Age 11,000 years ago. But in the last ten years, new tools applied to old bones have yielded evidence that tells an entirely different story.

In Bones, Elaine Dewar records the ferocious struggle in the scientific world to reshape our views of prehistory. She traveled from the Mackenzie River valley in northern Canada to the arid plains of the Brazilian state of Piaui, from the skull-and-bones-lines offices of the Smithsonian Institution to the basement lab of an archaeologist in Washington State who wondered if the FBI was going to come for him. She met scientists at war with each other and sought to see for herself the oldest human remains on these continents. Along the way, she found that the old answer to the question of who were the First Americans was steeped in the bitter tea of racism.

Bones explores the ambiguous terrain left behind when a scientific paradigm is swept away. It tells the stories of the archaeologists, Native American activists, DNA experts and physical anthropologists scrambling for control of ancient bones of Kennewick Man, Spirit Cave, and the oldest one of all, a woman named Luzia. At stake are professional reputations, lucrative grants, fame, vindication, even the reburial of wandering spirits. The weapons? Lawsuits, threats, violence. The battlefield stretches from Chile to Alaska.

Dewar tells the stories that never find their way into scientific papers — stories of mysterious deaths, of the bones of evil shamen and the shadows falling on the lives of scientists who pulled them from the ground. And she asks the new questions arising out of the science of bones and the stories of first peoples: "What if Native Americans are right in their belief that they have always been in the Americas and did not migrate to the New World at the end of the Ice Age? What if the New World's human story is as long and complicated as that of the Old? What if the New World and the Old World have always been one?"

This book begins with a simple question. Where did Native Americans come from? I know I was given an answer when I was just a child, before I had learned enough about the world, and enough about how we learn about the world, to eve ask the question for myself. This answer was a comfort to immigrants and the children of immigrants as they broke ground, built towns and cities from one end of the hemisphere to the other, and muscles aside the descendants of people who were in the Americas before them. It often popped up before the question could be formed, particularly in those scarce moments of moral hesitation when new immigrants came face to face with those they had displaced, and recognized that Native Americans were suffering and dying even as they, the newcomers, prospered. For more than a century this answer was ready for anyone who needed it: Native Americans came from somewhere else—from Asia. All are descendants of the same immigrant people.

I was born in the middle of the twentieth century on the Great Plains—in the city of Saskatoon, Saskatchewan. I am the grandchild of immigrants from Eastern Europe who arrived there when it was still a frontier called the Northwest Territories. The government of Canada promised free land if my grandparents would go to the Prairies and bust the sod. And so they left the wars and racism and religious hatreds of Russia and Romania, migrating halfway around the globe to the New World. They helped to colonize the beautiful and frigid prairies. Their first homes were sod houses, built of the thick squares of turf they cut out of the ground. They were known as pioneers, as if no one had ever been there before them.

If they had regrets about being part of a process that ended the ancient and complex relationship between Native peoples and their lands, I never heard them discuss it. By the time I came along, they were city folk with their own businesses (although my mother’s father held fast to his northern farm for many years, not letting go even after his tractor fell on him, when he was eighty-five). Native people had been pushed so far to the margins of society that my contact with them came mainly at fairs and parades and multicultural festivals where ethnics of all sorts came forward, in costume, to sing their foreign songs and dance their foreign dances. We were all immigrants together in the New World and therefore in my mind we were equivalent: we came from Eastern Europe, they came from Asia. I did the hora, they had their powwows, their drums and their fancy dancing. We came on boats and built the railroads. Exactly how they came was a matter to be determined by science because they had no written histories, just stories about their origins, encased in languages that no one but the old people spoke anymore. Governments and church schools tried to wipe those languages away because they interfered with the process of making Native Americans just like everybody else. If the Native people were unhappy about that we didn’t hear of it. (How could they complain? Status Indians in Canada only got the right to vote in 1960.) It was up to science to dig up the Truth — and teach it to them.

"Elaine Dewar is the Rachel Carson of Canada, in the sense that her work is aimed always at expanding mental horizons, preserving the sanctity of the national conscience, and telling a fresh and interesting story. This time she's taken on nothing less than a revised history of the original peopling of the Americas, and with typical thoroughness she goes back, not to their roots, but to their bones which tell a much more fascinating story. This is a must read." —Peter C. Newman

"This is an important book, because it debunks a scientific orthodoxy that has determined not only how those in the western hemisphere approach their history but also the place aboriginal people occupy within that history. Dewar is a sharp-minded questioner [with] a novelist's eye for describing people and places…Bones is a delightful read." —Quill & Quire
“ Dewar’s book is bound to shake archeologists out of their complacency.” —Heather Pringle, Canadian Geographic
“…exhaustive and compelling…Like a true forensic anthropologist, [Elaine Dewar] builds her case a brush-stroke at a time…she is a superb writer, and her book is as much a travel book as an account of a spell-binding scientific journey….Bones ought to stir up the pot…” —Wayne Grady, Montreal Gazette
“ a compelling account…the peopling of the Americas is one of the epic chapters in the human story.” —Maclean’s
“Elaine Dewar is a Canadian journalist with an excellent eye for hidden stories…Dewar flawlessly captures the atmosphere of academic rivalry, gossip, infighting for grants and professional reputation, competition for access to important finds, and even the legal manoeuvres, which characterize a field of study at a time when new finds and new techniques are transforming old views….Dewar has written a fascinating exploration of the political and academic implications of the unburied skeletons and the potential information they contain.” —Robert McGhee (curator of archaeology at the Canadian Museum of Civilization) in The Globe and Mail

On the Origin of the Deadliest Pandemic in 100 Years