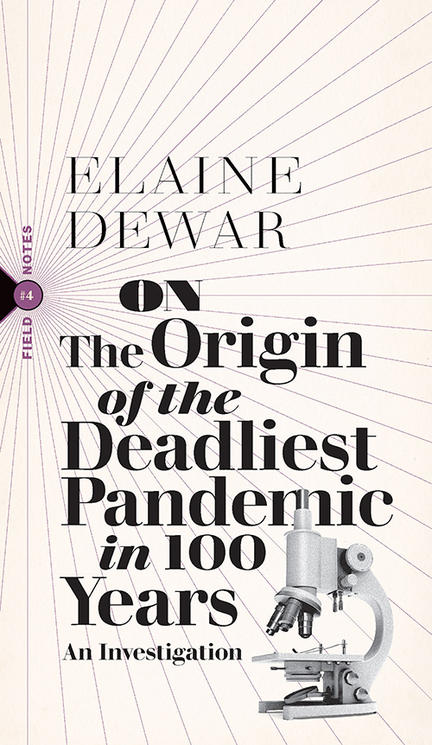 In this compelling whodunnit, Elaine Dewar reads the science, follows the money, and connects the geopolitical interests to the spin.

When the first TV newscast described a SARS-like flu affecting a distant Chinese metropolis, investigative journalist Elaine Dewar started asking questions: Was SARS-CoV-2 something that came from nature, as leading scientists insisted, or did it come from a lab, and what role might controversial experiments have played in its development? Why was Wuhan the pandemic's ground zero—and why, on the other side of the Atlantic, had two researchers been marched out of a lab in Winnipeg by the RCMP? Why were governments so slow to respond to the emerging pandemic, and why, now, is the government of China refusing to cooperate with the World Health Organization? And who, or what, is DRASTIC?

Locked down in Toronto with the world at a standstill, Dewar pored over newspapers and magazines, preprints and peer-reviewed journals, email chains and blacked-out responses to access to information requests; she conducted Zoom interviews and called telephone numbers until someone answered as she hunted down the truth of the virus’s origin. In this compelling whodunnit, she reads the science, follows the money, connects the geopolitical interests to the spin—and shows how leading science journals got it wrong, leaving it to interested citizens and junior scientists to pull out the truth.

Praise for On the Origin of the Deadliest Pandemic in 100 Years: An Investigation

“[Dewar] has spent the pandemic following the politics, the scientific research, the news coverage—and the money … Her book casts a shadow over the wet market theory and points a finger at the Chinese government—and at some scientists and leading science journals for their single-minded support and promotion of this theory … The book reads almost like a detective novel.”—The Globe and Mail

“Dewar gets us to an acceptable truth about the origin and the travels of this coronavirus, and the significant tardiness and incompetence of governments and science to protect the public.”—Winnipeg Free Press

“I would highly recommend [On the Origin of the Deadliest Pandemic in 100 Years] to anyone interested in knowing more about the origin of the COVID-19 pandemic. Her very thorough research, based on publicly available documents, shows how China badly managed the initial phase of the pandemic and manipulated the WHO which resulted in an underestimation of the problem and delays in putting in place measures to limit the damages of the pandemic in other countries.”—Guy Saint-Jacques, former Canadian Ambassador to the People’s Republic of China

“Before I read this book, I thought the Wuhan lab leak hypothesis was just a wild conspiracy. Elaine Dewar makes a very strong case that it may well be true. She even goes farther, showing scientists are often sloppy with hazardous biological materials, that they engage in naive research with some dubious government actors, and, when caught, dodge responsibility by smearing their critics as enemies of science.”—Mark Bourrie, RBC Taylor Prize- winning author of Bush Runner: The Adventures of Pierre-Esprit Radisson

“In this age when reliable news is hidden in a cacophony of mis-information, dis-information, social media idiocy and the caterwauling of celebrity influencers, long-form journalism is coming back into its own. Elaine Dewar uses her formidable reporting skills to produce the story of the moment. The pandemic forced her to follow I.F. Stone’s dictum to work exclusively from published, public sources, and her story is the stronger for it. This is, of course, a detective story, a whodunnit, and Dewar is unstinting in exposing the cover-ups, the political expediency, the deceits, and the sloppy work and judgements of usually diligent scientists along the route to her conclusions.”—Jonathan Manthorpe, author of Restoring Democracy in an Age of Populists and Pestilence

"Dewar is justly well known for her relentless research and we are fortunate to have her.”—Philip Marchand, National Post

"Dewar is a keen observer of place and personality."—Publishers Weekly