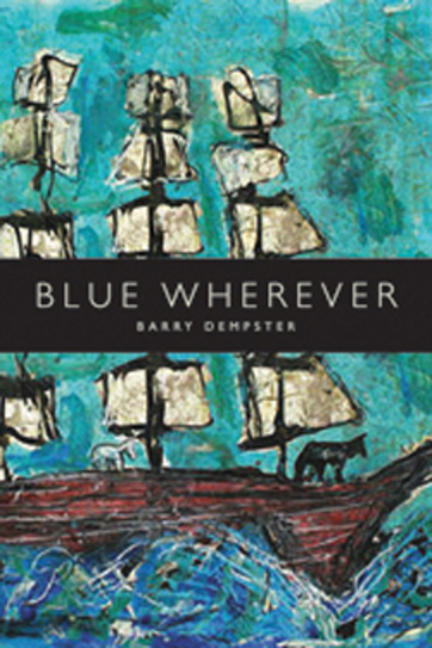 “In the new world, we wake up/to a bone ark bobbing on a blue wherever,” Dempster writes in the title poem of this new collection, his twelfth book of poetry. He connects the intensity of loving someone with the visceral vividness of being alive, as though waking from a beautiful dream and finding the world still sparkling. Granted, there is still loss and loneliness, even huge awols of hope, but the particulars of the outside world remain spectacular despite their ordinariness: cedar wax-wings with their “little caramel whisks/of hairdo above Lone Ranger masks;” the one-eyed horse who “wouldn’t/blame you if you ran, muck flicking/from the soles of your shoes;” the river rocks in the front garden “pretending/the inanimate way is holy,/a stunning coldness in the place of eyes.”

Blue Wherever returns us to being in the moment with an intensity and beguilement often reserved for romantic love, and from the various perspectives of observer and creator.

Whether it be Pancake Tuesday, a lonely Office Party or a Sunday drive through strip-mall Wastelands, Dempster reminds us there is still much to see and myriad reasons for staying awake and alive.

The real question is what, not how. The grief that I hold grave in my heart, spend my days trying to resolve. What if I gave the same attention to happiness, would I find it somewhere in the queer ridges of my nails or the stringy backs of my shins? Decide to live on love alone and I’d either starve or conjugate, a little fondness joined to same until the sighs begin to sound like bells, giddy with momentum.

Hard times, I thin myself to a shadow, the vague hint of footsteps behind my friend’s back, the faintest flicker at the fireplace. Not even war can stop me from loving the world, quietly unrequited. The killer virus shrinks at the very mention of quarantine. The tulip shoots shiver with purpose. Cold and cruel, a chorus complaint. Just touching a chair these days is a kind of embrace.

In this state of perfection, we wake up to a bone ark bobbing on a blue wherever, just the two of us in our various roles. The doves will come and go, their breeze adding frills to the blunt tops of waves. The elephants, surprisingly, can swim. As can the caramel-coloured ants with their hollow abdomens. And those who can’t, well, they will ride the slopes of our floating shoulders, almost in the shapes of wings.

“'Is it narcissistic to want a / personal relationship with everything?' Barry Dempster wonders in his latest poetry collection. This desperate yearning for intimacy pervades the book, lending an air of wistfulness and melancholia to its otherwise playful tone. Whatever the answer to his question, Dempster strives to make intimate connections "with everything" (in poems whose subjects range from office parties and mid-life crises to coyotes and herb shops).

His search is a stay against oblivion, against the figure of Death with his "full-body frown." It's an existential angst that is relieved only by contact with the physical world. "Just touching a chair / these days is a kind of embrace," he writes in "Happy to be Cold." The commuter in "The Empty Seat" is gripped with almost pathological feelings of emptiness until a fellow passenger finally takes the seat next to his. Disembarking, the commuter brushes "against / every shoulder, every open hand," as if that slight human contact will anchor him to the earth.”