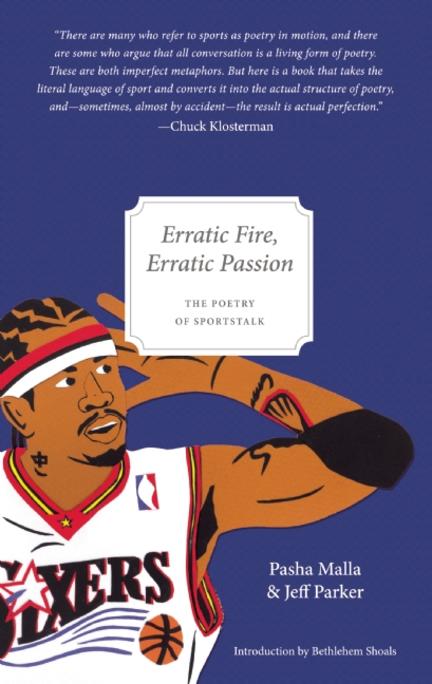 Erratic Fire, Erratic Passion is a collection of found poems composed of the words of professional athletes.

The content of post-game interviews and sports chatter is so often meaningless, if not insufferable, and yet there are athletes like Metta World Peace who transcend lame clichés and rote patter, who use language in surprising ways, who can be funny and shocking and insightful and alarmingly sincere — pure poetry. Muhammad Ali offered dazzling displays of lexical wizardry, and Allen Iverson’s infamous “practice” rant shifted the post-game press conference from the banal to the absurd.

This book is a celebration of these rare and exceptional moments. Various poetic forms and line-breaks highlight — or, in the words of Deion Sanders, “deem to set a candor on” — the sophisticated, sublime, and surprising performances of language made by professional athletes.

Jeff Parker is the author of the novel Ovenman (Tin House Books). His short fiction and nonfiction have appeared in The Best American Nonrequired Reading, Matrix, Ploughshares, The Walrus, and others. He and artist William Powhida collaborated on the collection of images and stories The Back of the Line (DECODE). With Mikhail Iossel he edited Rasskazy: New Fiction From a New Russia (Tin House Books) and Amerika: Russian Writers View the United States (Dalkey Archive). He is currently the Acting Director of the MA in the Field of Creative Writing program at the University of Toronto.

"There are many who refer to sports as poetry in motion, and there are some who argue that all conversation is a living form of poetry. These are both imperfect metaphors. But here is a book that takes the literal language of sport and converts it into the actual structure of poetry, and -- sometimes, almost by accident -- the result is actual perfection." — Chuck Klosterman, author ofI Wear the Black Hat

Other titles by Jeff Parker

Where Bears Roam The Streets

The Taste of Penny