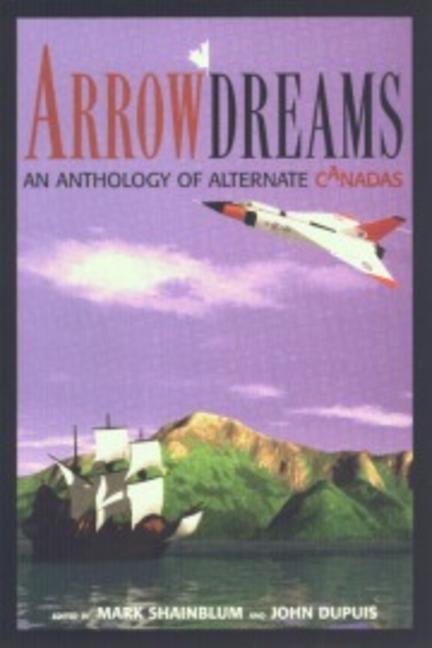 "If only..." French forces had defeated the British at the Plains of Abraham. "If only..." Avro had built its famous aircraft. "If only..." Louis Riel's Red River Rebellion had succeeded and he'd escaped the hangman's noose. "If only..." the Louisiana Purchase had gone to Canada instead of the United States. "If only..." Henderson had missed that heart-stopping goal in 1972.

"If only..." is the elemental force behind all forms of speculative fiction, none moreso than alternate history. It's also virtually a Canadian mantra.Winner of the Aurora Award, Arrowdreams is the first ever collection of Canadian fiction in this genre, exploring the highways and byways of historical paths not taken.

Born in Nova Scotia, raised in Edmonton, Alberta, and followed by stints in Logan, Utah and Prince George, BC, Derryl Murphy now lives in Saskatoon, Saskatchewan with his wife and two sons. When he isn't writing, Derryl referees and coaches soccer, and continuing the soccer theme cheers on his boys as they play.
His first short story, "Father Time," appeared in Tesseracts 4 in 1992. Since then, he's sold numerous stories to magazines and anthologies. In 2005 his first book, Wasps at the Speed of Sound, came out from Prime Books. A collection of ecological science fiction stories, it holds ten reprints and one original short story. In 2009, Derryl co-wrote Cast a Cold Eye with William Shunn, a novella of ghosts and the Spanish flu which was released by PS Publishing. He has been nominated three times for Canada's Aurora Award, once for a science fiction review column he once wrote, once for his short story "Body Solar," and once for "Mayfly," a short story he co-wrote with Peter Watts.
Derryl's newest book is the novel Napier's Bones, released in March of 2011 by ChiZine Publications. A mathematical dark fantasy/suspense thriller, the novel has been called a "surprising and all too rare treat."

Michael Skeet has worked as a writer, journalist, broadcaster and editor since the mid-1970s. In 1992 he won the Aurora Award for his short story "Breaking Ball". Michael is a founding member of SF Canada, the Canadian speculative fiction writers organization, and is also a founding member of the Toronto writers workshop inspired by the late Judith Merril.

For over twenty-five years, Paula Johanson has worked as a writer, teacher and editor. Among her twenty-nine books on science, health and literature the most recent are Love Poetry: How Do I Love Thee? (Enslow Publishers), What Is Energy? from the series Let’s Find Out! (Rosen Publishing), and the science fiction anthology Opus 6 (Reality Skimming Press). An accredited teacher, she has written and edited curriculum educational materials. Recently she completed an MA in Canadian Literature at the University of Victoria. A lifelong hockey fan, she listened on radio to the first Canada/ Russia hockey series, and is

"What's up coach?" said Wilson, making himself comfortable in a chair. He had an idea that he'd been called in to be told that he'd made the team. After all, the morning's performance should have been more than enough to prove that he deserved a spot on the roster more than Smolnikov did. This was it. The point he'd worked all his life to get to, his life-long dream about to be realized. He was going to remember this moment and savour it for all time.

"You followed our team last year, didn't you?"

"I'd been drafted by Toronto the year before, so yeah, I kept up with whatever was written in the papers."

"Good, good," said Coach Chase. "Then you know that our defense had the third-best plus-minus rating, and allowed the fourth fewest goals in the league."

"Sure, those were good numbers."

Chase nodded. "So you realize that I've already got five good defensemen and it would be difficult for someone new to fit in with the defensive system that's already in place."

Wilson's soaring hopes suddenly came crashing down in flames. He knew that when Coach Chase said someone new, what he was really saying was a Canadian. So he wasn't going to make the team, after all. Wilson shifted uncomfortably in his seat, and placed a hand over his suddenly turbulent stomach.

"You know how it is," said Coach Chase, sounding more apologetic than authoritative. "People want to see the Russians play, they think their style of hockey's more exciting, more entertaining."

Chase got up and started pacing around the room. "I don't like it any more than you do, but that's the way it is. Maybe if Henderson hadn't hit the post in the dying seconds of that final game back in 1972, then maybe things would have been different. If he'd scored and we'd won the series, then maybe the Russians would have had to learn the game from us instead of the other way around. But no, he hit the post and they came back up the ice and scored..."

Chase shrugged. "The next season every team's got an operative behind the iron curtain. First Tretiak defects, then Kharlamov and Yakushev. Next thing you know, the Russians are making the deals themselves, using our money to make their hockey program stronger." Chase shook his head in dismay. "But what am I telling you all this for, kid? You probably know it as well as anybody..."

Chase sat down in the chair behind his desk. "Look, I'd love to stack the team with Canadian talent, play it tough, you know, real old-time hockey, but the owners want a team full of Russians. Better for product licensing and television revenue. I almost convinced them to start building up a team with young Canadian talent, but the Canucks shot that all to hell last spring when they won the Cup by dressing every Russian on the roster through the playoffs."

Chase suddenly threw up his hands as if he were disgusted by the whole situation.

Wilson took a deep breath and nodded. Who'd he been trying to kid? Who'd want a Canadian defenseman when they could have one of the best young Russians instead?

But, he reasoned, maybe things might change. If the Leafs couldn't use him, then maybe another team could. There was talk about the Oilers making the move to strictly homegrown talent. Sure it was a cost-saving measure on their part, but it was still a chance to play in the bigs. Wilson decided he'd work twice as hard this year and be ready if and when the call came.

"Am I going back to junior?" he asked.

Chase shook his head. "No, we don't think another year in junior as an over-age is going to help you much. We're sending you off to our minor league affiliate in Minsk."

"Really?" asked Wilson. This was good news, very good news. The Minsk Maple Leafs were one of the top teams in the Russian Hockey League, the best minor-pro league in the world. Heck, Gretzky and Lemieux were even playing out their careers there.

"Yeah, really. You do well there and maybe we'll call you back by mid-season."

They weren't giving up on him. So, he wouldn't be playing for the Leafs this year, at least he was being given the chance to improve his game by learning from the best hockey players in the world.

The Russians would teach him to play the game their way and he'd be that much better for it. Then, he'd be back in Toronto, wearing that eye-catching, army-red and white jersey the Leafs had adopted a few years ago to make them look more Russian. The dream was not over.

Not by a long shot.

“Space, alas, prevents me from saying more about this entertaining and frequently challenging book.... Hats off to Shainblum and Dupuis for this endeavor and may there be more!”

Other titles by Allan Weiss

Speak to the Devil

Other titles by Derryl Murphy

Wasps at the Speed of Sound

Other titles by Eric Choi

Tales of Migrations and Fractured Borders

Other titles by Michael Skeet

Other titles by Paula Johanson

Tower in the Crooked Wood