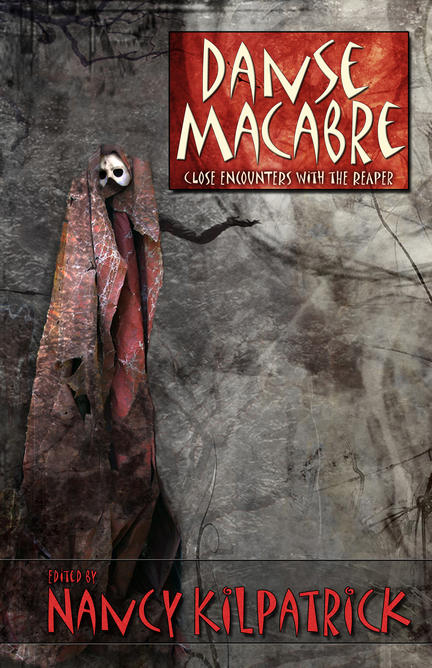 This anthology could be the most unusual and original collection of stories you'll ever read! Twenty-six literary reflections embody the themed, classical artwork devoted to the spectrum of humanity's intriguing interactions with the Angel of Death in all his/her/its ¬manifestations.

We, the living, have always exhibited a fascination with Death. We can't help ourselves. Death is, after all, one of our two most personal experiences, the other being Birth.

Back in the 14th century, when the world was in the grip of the Black Death, people were immersed in demise. From then until the 19th century, the plague was an onagain, off-again reality that, when most virulent, effected communities on a daily basis. The Black Plague decimated the population of Europe by approximately fifty per cent.

Whenever catastrophe strikes humanity, the arts always prove themselves invaluable. Through the metaphor of art, people come to terms with the inconceivable. Events that traumatize us individually and/or collectively evoke a need to make sense of what happened and the arts allow deeper connections to be made, aiding our ability to cope.

The Dance of Death (English); Danse Macabre (French); Totentanz (German); Danza Macabra (Italian); La Danza de la Muerte (Spanish); Dansa de la Mort (Catalan); Dans Macabru (Romanian); Dodendans (Dutch); Dança da Morta (Portuguese), these are but some of the names for what has been called 'plague art', visual artwork, sometimes accompanied by text, that grew out of the Medieval collective experience. Most commonly known as Danse Macabre, the visual aspect of this art depicts one or more skeletons — the formerly living — leading the dying from this earthly plane to another realm. These skeletons achieve this by inviting people to dance their way to the end of life, a rather charming approach to a date with mortality, if you think about it.

The initial Danse Macabre paintings appeared on the interior walls of the Le Cimetière des Innocents in Paris in 1424 (artist unknown), accompanied by poetry. This was not a cemetery as we know them today but a fenced-in bone yard, where remains were tossed onto an ever-expanding pile. During the Black Plague, so many succumbed — the cause of the plague

unknown at that time — that everyone knew someone who had capitulated to this disease: family, friends and neighbors, bakers, priests, Queens.
Danse Macabre took hold of the collective consciousness because in the midst of all this expiration, one truism emerged: Death comes to us all. No one is spared, from the beggar to the King, the merchant to the Pope. Death is the one great equalizer. And the bereaved can find some solace in that fact.
Early Danse Macabre art showed mostly males leaving this mortal coil, but soon artists were pencilling females into tableaux, for instance, milk maids, nuns, prostitutes, dowagers, mothers and their daughters. A wide spectrum of mortals were caught in a personal interaction with the Angel of Death, who was encouraging them to 'dance'. Meanwhile, the mortal was: stalling for time; attempting a bribe; pleading their case; hoping to trick the reaper grim, etc. And despite Welsh poet Dylan Thomas' warning: "Do not go gently into that good night. Rage, rage against the dying of the light.", the occasional person was shown dancing willingly.
Mortals in Danse Macabre artwork are, naturally, portrayed with emotion. Death, on the other hand, is usually seen as an impersonal skeleton, merely doing a job, neither just nor unjust. This artwork was taken as a memento mori, "Remember, you will die". The motif is a reminder that by being aware that Death waits in the wings until the music starts, Life should be viewed as precious, experienced vividly; each moment counts.
Knowledge of human anatomy was sketchy but became more sophisticated over the centuries. Earlier skeletons are barely recognizable as such. They appeared as hairy, fleshy, wrongly shaped, with crucial parts missing, and creatures that live in the earth added to their bones as special effects — it's a wonder some could stand, let alone play an instrument, which they sometimes did as accompaniment to the dance they were trying to entice mortals to! Many looked more like the skeletons of monkeys, rather than humans. But despite the primitive quality of the earliest artwork, it's surprising how often their bony skulls managed to hint at cuteness or cunning, cruelty or caginess, cynicism or chivalry. They could be laughing at us or weeping for us but the underlying sense is that Death has seen it all before, and will again.
The first Danse Macabre artwork from the 14th century did not survive when the Parisian cemetery was demolished (once science discovered germs and realized the dead should be burned or buried and not left out in the open). Those images were, though, reproduced in a book, woodcuts designed by Hans Holbein the Younger.