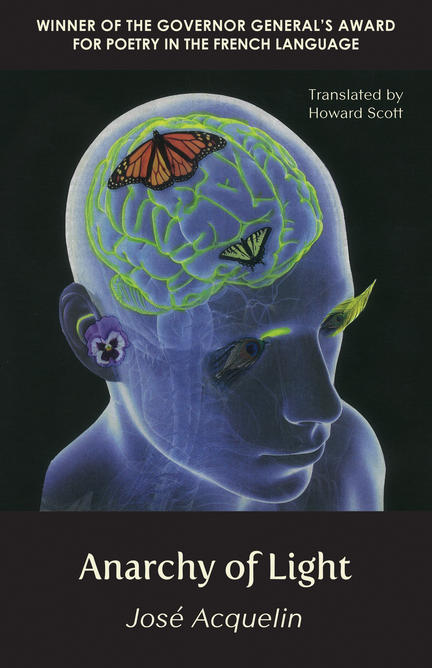 "Anarchy of Light" is a wondrous collection of poems intricately written with a remarkable use of language. José Acquelin's poetry provides luminous insights into our complex lives while being both meditative and lucid. This book reveals the author's philosophy, his views on poetry, the infinite perspectives of humanity, and the structure of the universe, ultimately revealing a contemplativeand skillful mind. The author deeply reflects on contemporary society and the unique role that poetry plays in his career. He invites the readers to revert back to the essential and natural elements of life in order to explore and understand the innate beauty of the universe. The French-language edition of this book, "Anarchie de la lumière," won the 2014 Governor General's Literary Award for poetry in the French language.

José Acquelin was born in Montreal to Occitan parents. Since 1987, he has published over twenty poetry collections, including "Anarchie de la lumière" which won the 2014 Governor General's Literary Award for poetry in the French language. He is also a producer and host of many poetry and music events. He currently lives in Montreal. Howard Scott was born in southwestern Ontario and moved to Quebec in 1975. His translation of "L'Euguélionne" by Louky Bersianik won the Governor General's Literary Award in 1997. He has translated many poetry, fiction, and non-fiction titles, often in collaboration with Phyllis Aronoff. In 2001, they won the Quebec Writers' Federation Translation Award and in 2009 they were shortlisted for the Governor General's Literary Award. He is a past president of the Literary Translators' Association of Canada. He currently lives in Montreal.