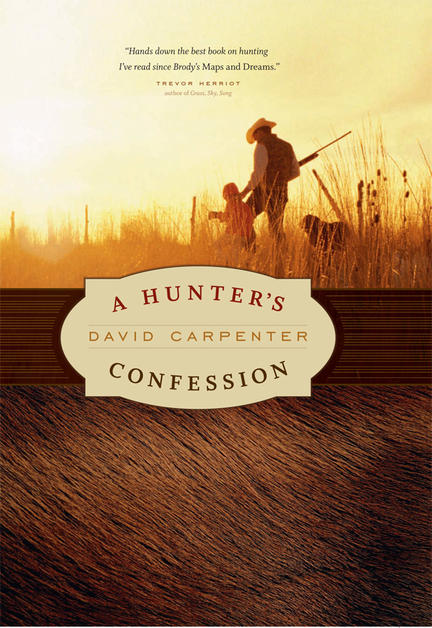 A Hunter's Confession tells the story of hunting-both its history and the role it has played in David Carpenter's own life, including the reasons he once loved it and the dramatic hunting incident that made him give up hunting for good.

Winding through this narrative is Carpenter's exploration of the history of hunting, subsistence hunting versus hunting for sport, trophy hunting, and the meaning of the hunt for those who have written about it most eloquently. Are wild creatures somehow our property? How is the sport hunter different from the hunter who must kill game to survive? Is there some bridge that might connect Aboriginal to non-Aboriginal hunters? Carpenter ponders questions like these as he describes what hunting has meant to him and to others throughout history and in our own time.

Carpenter beautifully evokes the sensual pleasure of holding a gun, the inherent spirituality among hunters, the intense relationship between the animals and their pursuers, and the transcendent joy of hunting. Finally, he conveys poignantly how for him animals have been transformed from objects of hunting to objects of wonder. Also available in paperback.

The two greatest things about Carpenter's sterling hunting memoir is how well-informed and precise it is—positively erudite; but never show-offish or exclusive. The second involves how much this knowing-ness is the natural tropism of the author's great and generous heart, his love for all creature—including the human one. —Richard Ford

David Carpenter's narrative is told with comic gusto, his own youth recalled in a sort of boys-own dramatic fashion. —Globe & Mail

Carpenterís book, A Hunterís Confession, is not a tightly reasoned apologia fashioned by a latter-day St. Augustine or St. Francis. He has chosen, rather, to mount an impressionistic carousel of anecdotes and observations that briefly touches upon his early hunting, his experiences with his companions, the history and prehistory of hunting, and the relative morality of subsistence hunting versus hunting for sport. —Literary Review of Canada

You can't read this book without feeling Carpenter's deep respect and reverence for the 'forest primeval,' and all the creatures in it. —Saskatoon Star Phoenix

Hunter writes expressively of the joys of the hunt: the hunter's heightened awareness of everything around him; the atavistic tension as hunter and quarry get closer; the humour, and occasional danger, when things go awry; the meals and stories shared with one's companions at the end of the day. —Montreal Gazette

The Hunter's Confession . . . is memoir, clustered around outdoor adventure, linked like fish hooked on a chronological dragline, and retold in the light of a life-changing personal crisis. —Prairie Fire Review of Books

David Carpenter's anecdotes, analysis of other writing on the subject, and personal soul-searching make for a lucid, provocative and often humorous exploration of an activity that has been both castigated and cherished over the years. —Winnipeg Free Press