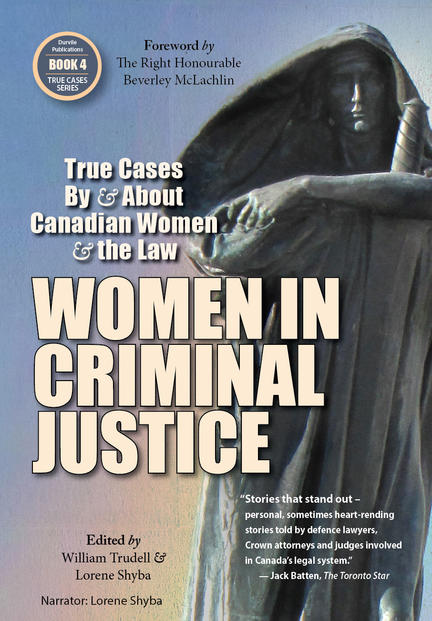 Women in Criminal Justice is Book Four in the Durvile True Cases Series and in it, Canadian women judges and criminal lawyers tell of cases that they have found particularly challenging. Some were disquieting/perplexing or had surprising turns, many are high-profile, and many continue to have interesting social or personal effect. Unique to this book, are distinctly women’s perspectives, and many chapters deal with sexual assault, Indigenous, child protection and motherhood, mental health, LGBTQ+, immigration, terrorism, and other vitally pertinent issues of the decade.

Beverley McLachlin was the Chief Justice of the Supreme Court of Canada from 2000 to 2017. She is the first woman to hold that position and the longest-serving Chief Justice in Canadian history. Born in rural Pincher Creek, Alberta, McLachlin studied philosophy and law at the University of Alberta before being called to the bar in 1969. After teaching at the University of British Columbia, she was appointed a judge in 1981. Throughout her prestigious career, she has served on many courts, including the County Court of Vancouver, the Supreme Court of British Columbia, the British Columbia Court of Appeal, and the Supreme Court of Canada. In 2019, McLachlin became a Companion of the Order of Canada, the highest honour within the Order. Her first novel, Full Disclosure, was an instant national bestseller.

Excerpt: Women in Criminal Justice: True Cases By and About Canadian Women and the Law (edited by William Trudell & Lorene Shyba; foreword by Beverley McLachlin)

Honourable Susan Lang “Flawed Forensic Evidence: The Motherisk Hair Analysis Independent Review” Overarching problems were rooted in the lack of adequate oversight by the Hospital. As a result, the Lab continued to test hair for forensic purposes before it even received clinical accreditation in 2011. Moreover, clinical accreditation related only to the Lab’s processes and did not assess the robustness or reliability of the hair tests. Sadly, the bottom line was that the Lab’s hair tests were flawed. They should not have been relied upon to make decisions in either child protection or criminal cases.

Honourable Nancy Morrison. “The Courage of Vicki” There was a mean shed in a nearby field. Small and old, a sometime pump house, it had a dirt floor, upright rough-hewn slats for walls, some barbed wire, broken pipes. Inside, feed for cattle. An old bathtub was outside, to be filled with water for the cattle. Its only door could not be seen from the grandmother’s farm. It was one of the places he took the child to rape her.

Honourable Lise Maisonneuve. “How to Shift a Culture” I understand that the readers of this book will be a varied lot, but I know that many women will read it pondering their futures in the criminal law arena. In this book, you’ll read many essays from experienced criminal lawyers — all women — who, despite the many challenges they faced in continuing and succeeding in their careers, persisted and, in turn, their contributions to the law have had important and positive impacts for both individuals specifically and society as a whole. They are examples for us all. In light of those stories, I see one of my roles as Chief Justice as encouraging women to follow in their footsteps. Part of that role involves encouraging and maintaining the gender diversity of our Court today as an administrative function as Chief Justice. But another part of my role is personal — telling my own story and the lessons I have learned and can share.

Honourable Danielle Côté: “Certainty? Certainly Not” A judge is ultimately alone when deciding a case and is always alert to the danger of a wrongful conviction. The truth is that not only is the judge alone, but if a wrongful verdict is rendered, also keenly aware that many may point out the judge as being a bad judge, incapable of rendering justice. Perfection is not possible. It is out of reach for human beings. A good judge is always trying to reach perfection. But is there certainty? Certainly not. But reaching for perfection helps me sleep at night.

Honourable Iona Jaffe. “The Toronto 18” Bound by his own sense of confidentiality, my colleague did not reveal any details. But he did make a gesture with one hand. He pointed down to the ground. I was clearly confused. He pointed to the ground again. It was at that moment, sitting in my office on the 35th floor of the Exchange Tower in Toronto, that it struck me. My colleague was pointing to the floor of the Exchange Tower. “This building is the target of the terrorist attack?” He just looked at me, and I knew I was right. To say I felt an instant sense of unease was an understatement. I wanted to leave the building of course, but my feelings of anxiety were mixed with feelings of guilt. I had knowledge and could leave the building if I wanted. But I could not share what I knew with anyone else in the building. Not yet. And I could not tell my family that the building to which I commuted everyday was apparently in the cross-hairs of a terrorist group.

Senator Kim Pate. “A Study in Discrimination and Inequity” When I was in the unit manager’s office at the end of the [prison] visit, the head of security interrupted our meeting to advise that he was planning to bring in the emergency response team. I asked why. He advised that the women on the segregation tier, the first range I visited that day, were rioting — screaming, yelling threats and banging the bars of their cells. I advised that I had been down there speaking with those women a few hours before and they were upset about the lack of programming and spiritual support — they were all Indigenous — but that they were working on a group grievance to address their issues. What was striking to me was what the head of security said: “Why don’t you take the baby down? I hear they like your baby.” I wondered, How serious could the risk be that the women posed if the head of security believed my baby could calm the situation?

“The reader emerges from reading Women in Criminal Justice with pictures in mind ... women who work without respite to achieve just outcomes for the people they deal with, often in the face of difficulty and at considerable personal cost.” — The Right Honourable Beverley McLachlin