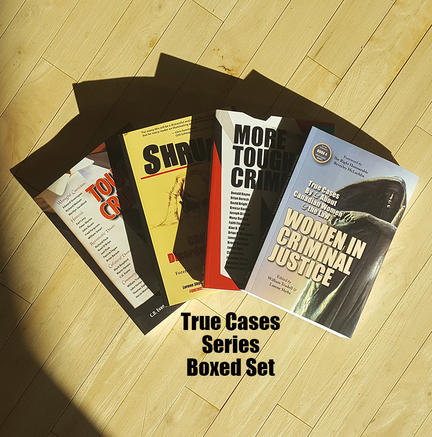 In this series, Criminal Lawyers, Judges, Forensic Psychologist and Psychiatrists write about cases that still keep them up at night. There are four books in the series.

Book 2, Shrunk, is a collection of true cases by eminent forensic psychologists and psychiatrists facing the tough topic of mental illness in the criminal justice system.

Book 3, More Tough Crimes, like its predecessor, provides readers with a window into the insightful thinking of some of the best legal minds from coast to coast.

Book 4, Women in Criminal Justice is women judges and criminal lawyers telling of cases that they have found particularly challenging. Some were disquieting/perplexing or had surprising turns, many are high-profile, and many continue to have interesting social or personal effect. Unique to this book, are distinctly women’s perspectives, and many chapters deal with Women’s, Indigenous, and LGBTQ+ issues.

William Trudell is the Chair of the Canadian Council of Criminal Defence Lawyers, a Fellow of The American College of Trial Lawyers, and recipient of The Law Society Medal. He practices at Simcoe Chambers in Toronto.

John Rosen on Defence of Paul Bernardo, from Tough Crimes

Much has been written about the videotapes, the failure of the police to find them and the horrific nature of their contents. But nothing has ever been said about the impact of the tapes on the lawyers. After taking possession of the tapes, [Clayton] Ruby and I met at his home to view them for the first time. We played the VHS tapes so as not to damage the originals. We also fast-forwarded through most parts. Our intention was to get an understanding of what was depicted so we could assess my legal, professional and ethical obligations.In truth though, the images depicted shook me to the core. At one point, I needed to stop and excuse myself for a few moments. The images were deeply disturbing and the implications were obvious. How was I going to defend this case in the face of these tapes? What would prevent the jury from coming over the boards at me for having the gall to advance any defence for this accused? Moreover, I am a father myself – what would my own family think of me? How was I going to survive a trial with my health and reputation intact? I could have avoided my responsibilities by claiming I was a witness to the chain of custody of the tapes. But what would that have said about the twenty-five years of my life that, at that point in time, I had dedicated to the criminal law? After a moment’s hesitation, I decided to set aside my personal feelings and interests and get on with the job at hand.

“Tough Crimes is an incredible collection of memorable cases .... Readers go behind the scenes as lawyers prepare for difficult cases and see how they handle their clients, witnesses, and other evidence during and after trial.” — The Calgary Herald

?“The Shrunk anthology takes a deep dive into the darkest, sometimes ugly, recesses of the minds of those whose deeds fill communities with shock, fear and revulsion.” — Canadian Press

?“More Tough Crimes is a revealing, at times searing and always very human look inside our criminal courtrooms and the people who populate them.” — The Globe and Mail

?“Women in Criminal Justice is a book with stories that stand out –personal, sometimes heart-rending stories told by defence lawyers, Crown attorneys and judges involved in the legal system.” — The Toronto Star

Other titles by William Trudell

Crime and Disorders of the Mind

Other titles by C.D. Evans

Reflections on the Revolution in the Legal Profession

Lust and Revolution in the Oilsands

Forty Years at the Criminal Bar

Other titles by J. Thomas Dalby

Crime and Disorders of the Mind