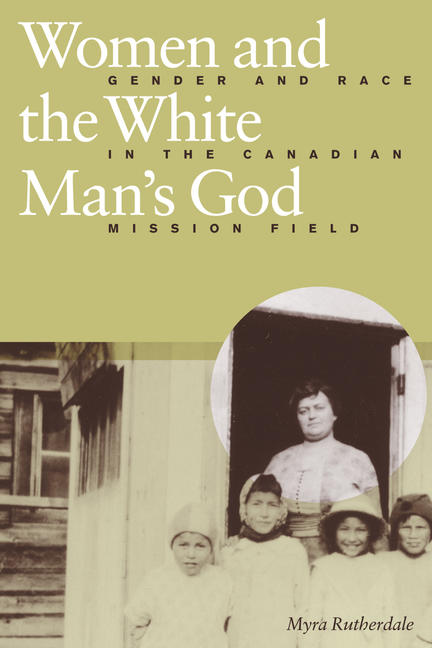 Based on diaries, letters, and mission correspondence, Women and the White Man’s God is the first comprehensive examination of women’s roles in domestic Anglican missions in northern British Columbia, Yukon, and the Northwest Territories. The status of women in the Anglican Church, gender relations in the mission field, and encounters between Aboriginals and missionaries are carefully scrutinized. Arguing that the mission encounter challenged colonial hierarchies, Rutherdale expands our understanding of colonization at the intersection of gender, race, and religion.

Myra Rutherdale (1961-2014) was associate professor of history at York University.

Myra Rutherdale provides a valuable and important analysis of the role of gender among Anglican missionaries who willingly went to the edge of civilization to bring faith and human services to the aboriginal peoples of the Canadian West. The text is carefully researched, well written, thoroughly documented and generously illustrated ... Rutherdale's effort will generate important discourse and keep women in the forefront of scholarly consideration of religion in the American and Canadian West.

This book is the first work to examine the role of Canadian women in northern missionary fields in a serious, scholarly way, and I highly recommend it.

Missiologists will find this study to be a helpful inquiry into the evolution of the role of women in mission. While Rutherdale exposes many of the serious difficulties encountered by women generations ago, she also shows how women were themselves complicity in patriarchy.

Rutherdale’s study of Anglican women missionaries in British Columbia, Yukon, and the Northwest Territories is a valuable addition to the sparse literature on domestic missions, especially on women missionaries. The author has made excellent use of a wealth of archival sources and contemporary printed accounts and has a fine eye for lively and revealing quotation.

Other titles by Myra Rutherdale

Aboriginal and Settler Women in Canada's Colonial Past

Caregiving on the Periphery

Historical Perspectives on Nursing and Midwifery in Canada