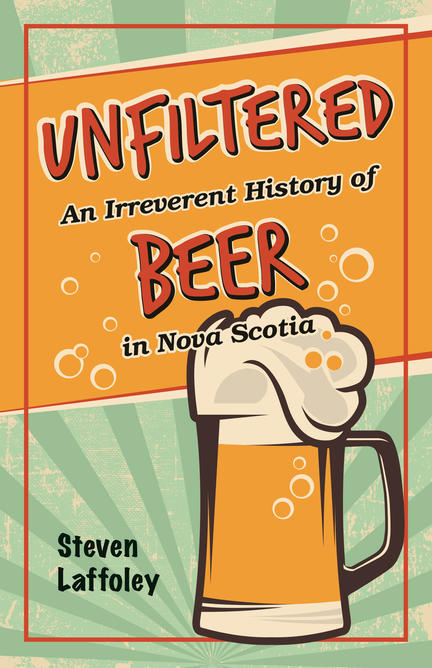 "My reason for being in the tavern was important. I wanted to better understand the history of beer in Nova Scotia. Or more specifically, I wanted to know how it was that Nova Scotians became the foremost makers and drinkers of the stuff. In truth, Canada had long ago tumbled down the consumption of beer per capita mountain among the world's nations, finding itself in paltry thirty-fourth place, lagging far behind beer-drinking powerhouses like Mexico and Botswana. And Nova Scotia, well, on average, Nova Scotians consumed only about eight litres per capita of beer per year, placing beery Bluenosers a scant eleventh among the provinces and territories, though we did have brew house bragging rights over the drinking denizens of Nunavut."
After extensive initial research, author Steven Laffoley discovered that the history of beer in Nova Scotia was as cloudy as a good pumpkin lager or a cold wheat beer on a dark winter's day. So with an intrepid, albeit mildly inebriated, explorer's courage, he packed up his notebook and set off in search of Nova Scotia's beer-filled past, which, as it turned out, was far stranger than he expected. It was a fascinating tale of heartwarming heroes, despicable villains, astounding secrets, and a gruesome murder or two, all with the added amusements of Victorian cross-dressing tavern patrons and a few goats with a passion for chewing tobacco and ale.
And now the story can be told.
You may want to pour a good glass of IPA for this.